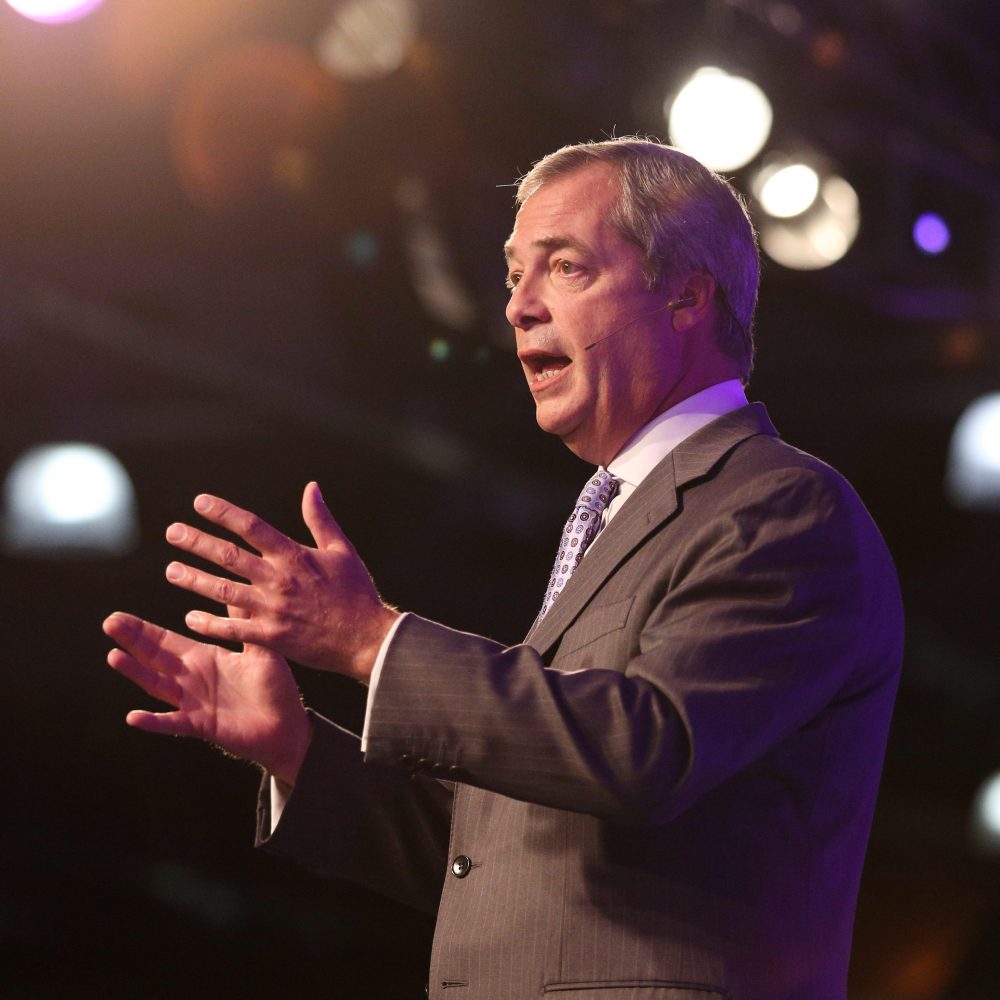 What’s Next for Nigel Farage?

He’s pushing Johnson for a no-deal exit, but what happens if the Brexit Party Leader gets his way?

Even with his impressive new fitness regime – less beer, more yoga – Nigel Farage must be feeling the strain in both arms this week, what with wielding two great weights around, one in each hand, wherever he goes, raising one each in turn, sometimes both at once – his twin political dumbbells, the stick and the carrot.

The stick was brandished first this week with the news that, as far as Farage is concerned, Boris Johnson’s “honeymoon is over”. Writing in the Telegraph, Farage was baring his teeth and warning the current prime minister that, unless Johnson commits to a no-deal Brexit, come the inevitable general election, the Brexit Party troops are amassed and Farage has big plans for them: “We will fight against him in every single seat in the country and he will not win the election.”

He added: If Johnson does choose to sell out his own people by consigning Britain to such a position of weakness (as a withdrawal deal), the Brexit Party would have no choice but to fight him in every seat at the next national poll.”

He added that the Tories “have lost a considerable amount of public trust” in recent years, with their only guarantee for victory at the next election coming with his Brexit Party’s support, what he calls “external backing”.

However, within 24 hours, Farage was purring once again, picking up his carrot instead and sharing some warm words for Johnson: “If we get behind Boris and he does the right thing, not only will he win a big majority, he’ll be a hero.”

It seems that, despite training all those battle-ready soldiers, Farage is ready to ask his troops to stand down in sensitive seats, and not put up any Brexit names against any Tory Brexit-supporting candidates, as long as the latter are those prepared to vote down any withdrawal deal that Johnson brings back from Brussels.

As he explained in the Telegraph’s Brexit podcast, “The way to fight an election is not on day one to think about where you won’t stand but make sure you have got candidates to stand everywhere.

“That is what we are doing – and then we will make the tactical decisions what the right thing to do is.” He calls it “for the good of the country”.

This comes after he promised a non-aggression pact with the Tories, again if the latter stick to what Farage calls a “clean-sweep departure” from the European Union. For a man who trumpeted “Independence Day” the morning after the Referendum, it seems “departure” is only what he decides it is.

This deft move from threats to promises in the space of 48 hours is proof of some nimble sidestepping by Farage, of which his fellow politician and enthusiastic ballroom dancer Vince Cable would be proud. And nobody could accuse the Brexiteer of lacking mental energy, either. What his party lacks in the long-term polling data available to other parties, he clearly makes up for in enthusiasm. It is testament to the strength of his personality that has created a new party while his former UKIP-ers can only trail far away in his wake. In a few short weeks, he has amassed an impressive 635 prospective Brexit Party candidates, all assessed, approved and even screen-tested, ready for the forthcoming battle.

The most eye-catching name is Jay Aston, formerly of Eurovision winners Bucks Fizz, who says she intends to “fight to uphold democracy for the sake of the people”. Headlines borrowed from the band’s vintage hits will obviously be writing themselves in the weeks ahead, although ‘Making Your Mind Up’ and ‘Land of Make Believe’ might be deemed too obvious.

However, when Farage version 2.0 does take pause for a sip of his green smoothie, might he just wonder, what is it all for?

Because the last few weeks have seen Boris Johnson’s chest-beating announcements for a post-Brexit Britain systematically sucking all the oxygen and ideas from the Brexit Party. As promises for controls on immigration, toughness on crime, infrastructure spending, mobile phone connectivity, stimulus packages all come frothing out of Downing Street, well… as the Telegraph’s Christopher Hope gently reminded Farage in their podcast fireside chat, “He’s nicked all your best lines.”

Farage says himself, “I thought several times I was listening to myself in the European election campaign,” and he highlights one of the continuing ironies of the way the cards have continued to realign themselves over the last three long years since the Referendum.

Just as the threat of Farage and his then UKIP party forced David Cameron to promise the country a say on Europe and so start this whole ball rolling, it is the success of his new Brexit party at the European elections that have pushed Johnson to take a firmer gamble on a ‘do or die’ exit from Europe by 31 October. But the weeks since have seen poll numbers for the Tories rise, as Leave voters feel more bolstered by Johnson’s apparent firmness – and it’s at the expense of the Brexit Party, whose poll ratings have fallen off a cliff in the same time.

As one Tory told the Times recently, “We do not want to do a deal with Farage’s Brexit Party. We want to swallow them whole” – which one might consider something of a ‘no’ to the offer of a non-aggression pact in the future.

Farage has been around the maypole too many times to reveal any disappointment at this turn of events. He professes himself “delighted, if he delivers it” at the prospect of Johnson’s no-deal Brexit, even if it effectively does him out of a job. He’s even said he doesn’t need to be made a minister if it does turn out to be his candidates, or lack thereof, that keep Johnson at Number 10.

He says himself, “I can’t be more generous,” and reminds us all, “I’m only in politics to change the direction of this country. Once it’s done, I’ll be very happy.”

He may be happy, but what will he do? Especially if the wheel he professes to want, that of a no-deal departure, keeps turning? Come October 31 and we’re out, then it’s beers all round, a slippery handshake with Johnson, perhaps a gesture of thanks but no reason for any voter of any persuasion to ever put their X in the Brexit Party ballot box again.

Less likely, with Johnson gambling that the EU will still make concessions over the backstop, we have the prospect of the PM returning from Brussels with a deal, or a promise of one, then inevitable delays, an election, more wrangling, and more room for Farage to continue to wriggle, and stay on the pitch.

The Brexit Party leader calls Theresa May’s agreement, even without the backstop, “the worst deal in history”. Just as his success in pushing the Tories to a more hardline departure model leaves less room for him, so Johnson’s need to keep other Tories on side mean there remains a battle for Farage to fight. By his own description, Nigel Farage remains ever-keen to step away from frontline politics. History would seem to prove that the circumstances are never quite right for such a departure.

« Why Abortion Rights Are Regressing in the U.S.
I Prioritised My Boyfriend Over My Best Friend »