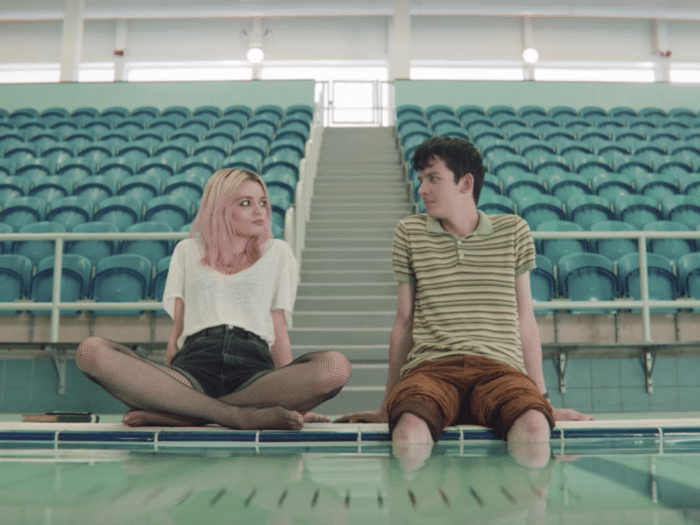 Skins, Sex Education and Being Sixteen

Why Channel 4’s Skins paved the way for Sex Education.

I want you to think back to year ten or, for some of you, maybe year eight. Cast your mind back to your first proper sex education class.

Amidst hazy memories of school dinners, knee-high socks, Kate Nash songs and back-combed hair, those of us that attended high school in the 2000s will know better than anyone that sex education was hit or miss.

You see, the noughties marked a huge shift in the way we talked about sex. Thanks to the 90s, sex had moved away from hushed tones to gracing Channel 4 before the watershed. From music to bisexual pop culture icons (think Panic! and My Chemical Romance), it felt like there was a transformation taking place. Partly thanks to a show called Skins.

Skins discussed sex, drugs and the confusion of being sixteen. It was brash and dramatic in places, but there was something very real about it. There were gay characters who had more of a storyline than coming out, there were ‘I have no idea what I’m doing’ characters, and, most importantly, it owned the monotony, fear and joy of being a teenager.

But, in schools across the country, frank and honest conversations about sexual health, pleasure and consent were still absent.

My sex education lesson involved a rather depressing assembly about periods. With no boys allowed, the girls trooped into the dreary school hall and heard that we were embarking on a journey to womanhood. We were advised to wedge one leg up on the bath (did anyone actually do this?!) to ensure that we got our tampon in right. Oh, and just like everything else ahead of us, it would hurt.

Young men were isolated from periods and perinatal advice. They, instead, discussed wet dreams while attempting to wedge a condom onto a banana. But, overwhelmingly, they felt more prepared for sex than the women I spoke to did – which, considering the fact that our male counterparts had a single two-hour session, was a bit of surprise. No, girls were instead educated on the idea of virginity, something that was incredibly precious. Young women were taught to treasure and cling onto their virginity, like some sort of internal Fabergé egg.

Sex Education tells the story of awkward teen Otis and his mother, Jean, a sex therapist. Despite Otis’ inexperience, surrounded by manuals, videos and tediously open conversations about sex, he’s become a reluctant expert on the subject. Using his insider knowledge, Otis starts counselling his fellow students on the wonderful world of sex – and, there’s something about it that is strangely accurate. Something about leaning on your friends for an education that is almost essential.

As Otis helps others realise their own desires, he realises his feelings for troubled-teen Maeve. And, after watching the first season, I couldn’t shift the sense of nostalgia I felt for being sixteen and knowing nothing and (of course) everything about sex. The fear of doing it, of not doing it and most concerningly, doing it wrong. Of the certainty and terror that can only be the first love, feeling completely unprepared for almost everything that ‘love’ would involve.

Sex Education managed to capture this, in a way that, for me, only Skins has ever been able to achieve before. Those under the age of twenty might not recall just how big Skins was. It was synonymous with youth in a way very few other shows had, or have since, achieved. And, for a lot of us, it was a source of real sexual education. Such a small percentage of schools discussed LGBT relationships but, through Skins, we watched both male and female protagonists explore them on screen. Aspects of identity, consent and the emotions tied to sex were played out for two million young people across the country on Channel 4.

The downfall of Skins? Development. The characters didn’t grow too much and they couldn’t, for they’d lose their core audience. They famously chopped and changed the cast every season, offering a new cast of brightly clad characters, rather than maturing them in real-time.

Skins approached sex with all the care of a sledgehammer. It was loud, raunchy and most importantly, aired on TV. But, there’s something to thank Skins for. It paved the way for Otis and Maeve to marvel at the power of intimacy rather than sex itself.

And, for the Skins generation, that’s a lesson we can take at any age.