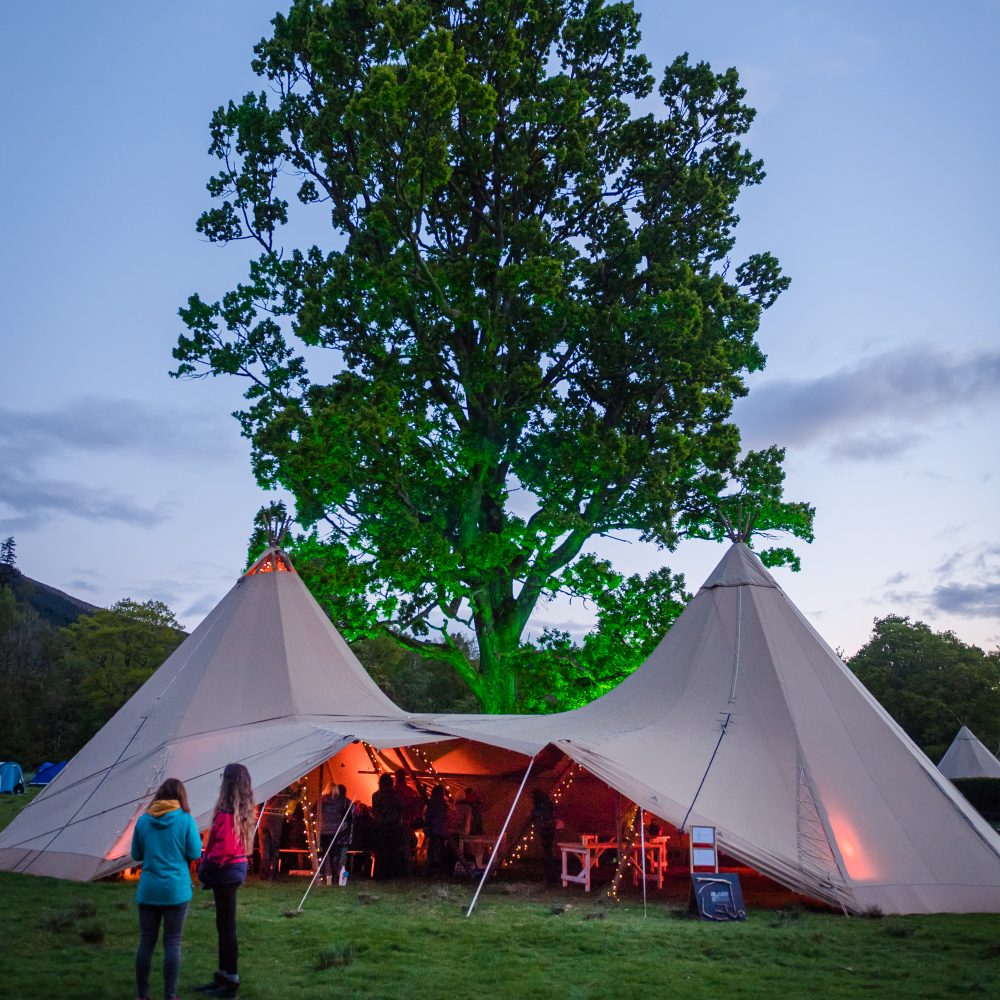 On the lawn that stretches from Scotland’s historic Ardkinglas House to the eastern banks of Loch Fyne, a group of kids are gambolling about in a spring shower. A series of tepees is set out across the lush grass, their open sides revealing yogis of all ages, shapes and sizes, practicing in the semi-outdoors. Nearby, an ice-cream truck is setting up, ready to dish out cones topped with the wares of that morning’s milking on a nearby farm. Sound like your idea of utopia?

It’s as close as it comes for Clemence Cocquet, a 39-year-old French former physio, who first saw an image of what has now become Scapa Fest during a much-needed meditation session. Based in Scotland and working in an NHS spinal injuries unit at the time, she’d found herself becoming disillusioned with our approach to recovery, sectioning patients off in windowless rooms, feeding them bland hospital food and expecting them to emerge, fixed.

“I started to not feel good and that affected my ability to fully look after people. It made me think, ‘hold on a minute, why are we trying to fix people in isolation?’ You can’t completely detach a person’s recovery from the environment they’re in – from the air they breathe and the food they eat. It doesn’t work like that. We are an ecosystem amid an ecosystem and if you don’t connect all those parts of you, something is going to break.”

An idea was born, and it was simple: that by reconnecting people to their environment, by turning them back to their basic human needs – connection, access to nature, local food and gentle activity – a collective healing could occur.

Three years ago, Clem held her first Scapa Fest, essentially a gathering of people keen to spend a weekend taking yoga classes and exploring the outdoors in a supportive environment. But not one to approach things by half, Clem was also keen to use the event to promote environmental awareness. The solution? To make the festival entirely zero waste. This year, when the festival returns in early May under the tagline ‘Sustainable Living in Action’ – albeit with a smaller number of guests than planned due to Scotland’s Covid-19 safety measures – it will be entirely solar-powered too.

Attendees arrive on the campsite armed not only with their tents and toothbrushes, but with refillable water bottles, their own plates and crockery, and as few plastics and single use products as possible. If you create waste, you take it with you – but everything is geared towards enabling participants to create as little rubbish as possible and leave the site apparently untouched. It’s an approach that 87 per cent of last year’s attendees described as “effortless”.

“Someone told me you can never help someone behave in a better way by making them feel bad,” Clem explains, when I ask why she has succeeded where others have not. “Sure, shaming someone might cause a rethink temporarily, but it doesn’t fundamentally change the meaning behind the behaviour. But when you elevate the energy and show support for a new way of behaving, it changes something bigger.”

Achieving a zero-waste outcome was “a massive challenge,” she admits. “We had public and environmental health initially saying it couldn’t be done. But I’ve learned you just have to hold on really tight and ask people to trust you.”

If all that sounds a little knit-your-own-dinner though, don’t be fooled, for Scapa can be as lively as it is enlivening. There’s a bar on site, a raucous evening ceilidh, whisky tastings and seriously good food. And no, it’s not vegan.

Was that controversial, I ask? “I’m not vegan, Scapa is not a vegan festival, and I’m glad you asked me about that,” Clem laughs. “For me, veganism is an example of extremes, and when you look at nature, generally speaking, extremes are not good. Clearly, intensive farming is not good, but that doesn’t just apply to animal products. A lot of the avocados that we have here have been intensively farmed in South America and flown in. It’s ok to ask, how good is that?

“So yes, I’m under a lot of fire, all the time. And it’s hard to say that I don’t think veganism is the solution, because the minute I say that I come under fire from those who believe that animal-based agriculture is what’s causing the world’s carbon issues. But I can’t deny that I have lots of examples around me, including with my own family in France, where the chicken on the table is coming from 100 metres away, or on Mull, where I live half the time and the pork I eat comes from just across the glen, of how not all meat-eating is bad. So, I stand by my belief that it is the scale of the thing that is destructive.”

So then, scale. The plan had been to release 750 tickets this year, making 2020’s Scapa the biggest yet. Now, while the event has been given permission to go ahead as planned, public health protection measures mean attendance will be kept below 500. Nonetheless, with more than 150 yoga classes and outdoor adventure activities, as well as a packed outdoor programme for kids on offer, guests will not be short on ways to keep active. Catering will come from Glasgow’s Streat, an organisation that works exclusively with local and ethical producers and suppliers, while a series of talks will be helmed by Rob Greenfield, an American environmental activist famed for a year-long experiment in which he attached all of the waste he produced to himself, documenting the process as he gradually became weighed down by a mountain of rubbish.

“He really walks the talk,” Clem enthuses about her big-name guest. “He’s a beautiful, really authentic, really genuine American guy who kind of lived that corporate life of abundance and destruction, and then changed his story. But I think what I love about him is that he doesn’t preach, he doesn’t condemn. He just tries things, documents it, and is very open and authentic about the struggle he goes through in taking these approaches. He’s such an inspiration, not because of what he says but because of what he does, because he’s not afraid to try.”

Greenfield will also feature in the festival’s first film programme, with a cinema making its on-site debut. “I’m really excited about that,” Clem grins. “It’ll be somewhere really cosy, and we’ve selected environmental action films that are all very family-friendly. Nothing scary, nothing aggressive, just beautiful, thought-provoking films.”

The key to it all, Clem says, is helping attendees to look afresh at their surroundings and ask questions about how they can lead a healthier, more sustainable life while still seeking out enjoyment and connection – a departure from the attention-grabbing approaches taken by other environmental movements, such as Extinction Rebellion, and an essential counterpoint to the current climate of fear and panic.

“Over the next ten years, there’s going to more questions than answers. There’s going to be a period of transition, and I think we have no idea how things are going to pan out. And that’s going to look terrifying, but it’s also really hopeful,” Clem opines when I question the effectiveness of peaceful activism.

“Currently, we’re in that gap where we know a solution has to be found but we either don’t have the technology yet, or we’re not ready in our own minds yet to take the huge leaps required. There’s going to be a lot of hesitation, a lot of unknown, but I think being comfortable with having questions and no answers is what we can aim for right now.

“I don’t want to preach and I don’t want to point fingers. It’s not about guilt-tripping anyone or making people feel bad about what they do. But a lot of us live lives in the cities with busy jobs, with kids, we’re normal people living really mainstream lives and we don’t have access to land and we can’t grow our own food and we still want to do something good. So that’s where Scapa fits into the equation. It’s about helping people to look at the tools they have to do this, to look at what they can celebrate about their own lifestyle. We don’t have to punish ourselves and go to extremes to achieve, but we do need to ask questions.”

It’s Clem’s utopia. And on the evidence of Scapa Fest over its short life so far, it might not be altogether unrealistic after all.

This year’s Scapa Fest will take place from May 1-3 on the Ardkinglas Estate in Argyll, Scotland. Find more information, or join the waiting list for tickets, here.

« Feel The Fear And Do – Well, Absolutely Nothing
Some Reassurance »