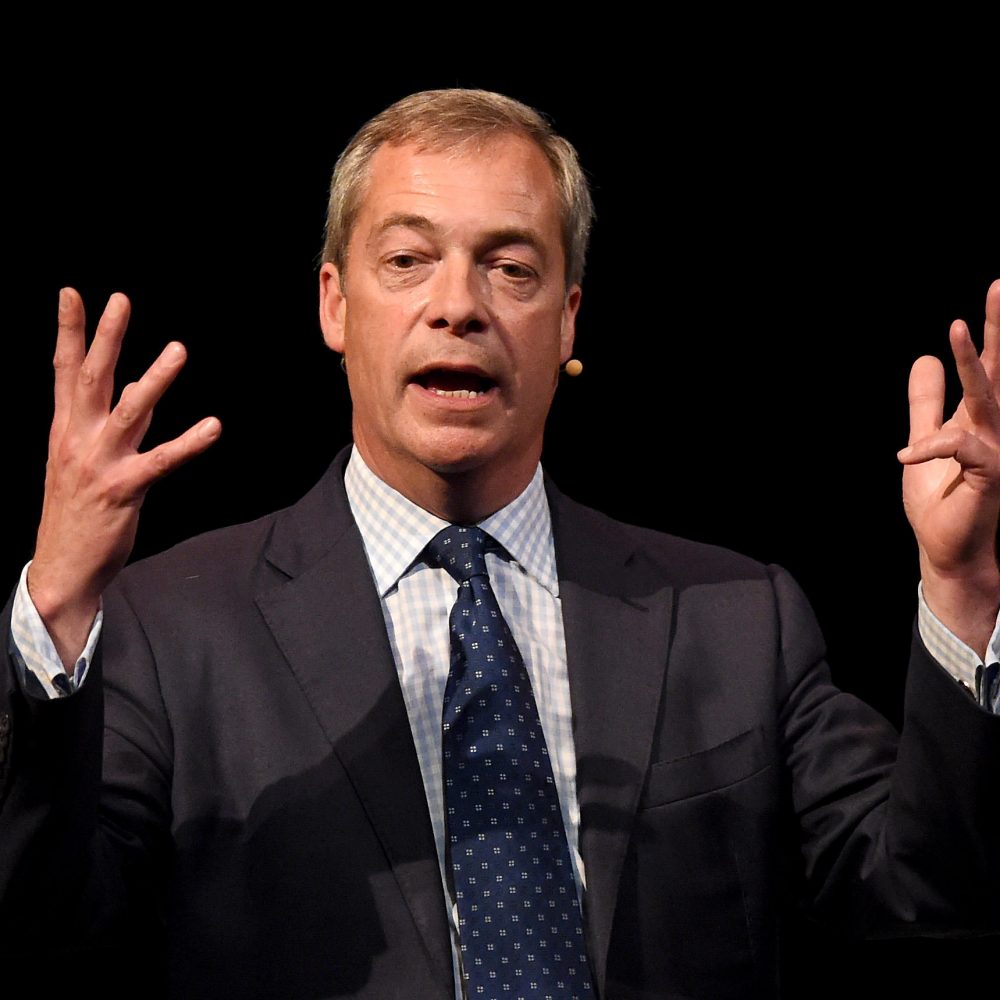 In a memorable episode of Noddy, Enid Blyton’s most appealing character paints his bedroom floor, then looks up and realises the door is on the other side of the room. Noddy has quite literally painted himself into a corner.

I was reminded of this timeless lesson while watching Nigel Farage take to the stage in Hartlepool this week for what was scheduled to be the launch of 600 Brexit Party candidates, taking on seats throughout the land, protecting the people who voted Leave, holding the government to account, but instead amounted to a collapse to his knees under the weight of the Tory Party.

Farage had been under mounting pressure all week from those who feared those same Brexit candidates risked drawing votes from Conservatives, handing seats to both Labour and Lib Dems, and therefore endangering his sole mission of Brexit.

Instead, after a night of thought, he declared a “unilateral alliance” – convinced, he said, by Boris Johnson’s latest tweak to his promises, departure by 2020 and a Canada-style trade deal without political alignment.

So, the question this raises is: Is Nigel Farage a solitary statesman nobly putting country ahead of party, or a chancer transparently putting his career ahead of the country?

For years, he has been juggling with two overwhelming personal desires: to see the UK part company from the European Union, and to promote and champion his own personal brand.

For a long time, these desires have been easily married. Farage still has the remarkable distinction of failing to become a Member of Parliament despite seven attempts, and nonetheless emerging as one of the most recognisable, telegenically appealing AND influential politicians of our age. On that fateful day in June 2016, it wasn’t until Farage belatedly conceded victory to the TV cameras that the referendum result felt so horribly real. He was for the longest time Brexit’s human, chuckling face.

However, ever since Boris Johnson took the reins of power, dangled a No-Deal solution over the Cabinet table and promised to die in a ditch if we didn’t leave, his broken promise notwithstanding, Farage’s mission has been less clear. Despite resounding victory in the summer’s European Election, Johnson’s harder stance has increasingly raised the question of the purpose of the Brexit Party and, with it, Farage.

Up until this week, he’d somehow managed to square the circle, claiming Johnson’s deal wasn’t Brexit as we know it, that his promised deal was 90% identical to Theresa May’s despised negotiation results earlier in the year, due to arrangements over the European Investment Bank, arbitration over trade disputes and the length of negotiations. As he told the BBC’s Andrew Marr a whole eight days ago, “My fear is that if Boris Johnson gets this treaty through, we will never achieve independence.” A little over a week later, and he’s changed his tune.

We wait to see whether Farage’s great gesture will afford the Tories the majority they need to stay in power, or whether his determination to stand elsewhere will still hand seats to Labour and therefore push Jeremy Corbyn into Downing Street, but the other question remains – what will become of Farage, now it looks like he’s been swallowed whole by the Johnson camp? As Matt Chorley asked in The Times: “Is it really a pact if you make someone an offer they can’t refuse, they do refuse, and then you keep your side of the bargain anyway?”

Well, there’s been an inevitable backlash from many sides. There are the Brexit Party candidates who won’t see again the £100 they paid for selection in those seats before being told to stand down. Farage told LBC on Monday, “I’m not going to refund their money. I am sorry for people who put their time and money on the line.”

And Labour and Lib Dem voices united in sharing their fears this was the first step in a Trump alliance and inevitable sale of the NHS before long. Lib Dem Ed Davey lamented, “Johnson’s hard-right Brexit takeover of the Tory party has now been endorsed by both Trump and Farage”.

But just as Farage says he is less scared of Johnson breaking his promises than he is of Lib Dems revoking Brexit, so he’s clearly played the percentages on his own political future. Had he stood in all those seats, split the vote and then Brexit somehow failed to happen, he would have been blamed by Leavers of every persuasion. Similarly, had he stood everywhere and gained nothing, his credibility as the voice of Brexit would have been in tatters.

By making this self-professed noble gesture, he can claim to put country ahead of party, support the cause of Brexit, “turn the guns on Labour” and help the government win a majority, but also hold those same powers to account by aiming to take some Labour seats and thus secure a voice in parliament.

He could say that the Brexit Party was always a movement rather than a real party, one designed to effect pressure on other parties, and it worked. With 29 seats won in the European election, he effectively saw Theresa May off the premises.

He could even argue that he has Boris Johnson in his pocket, not the other way around. As he told LBC on Monday, “I’ve outplayed and out-classed the Conservative Party. If we weren’t here, Theresa May would still be Prime Minister.”

But her departure, and Johnson’s arrival, was also the day Farage started running out of wriggle room. Every time it looked as though the country was settling for harder and harder Brexit, with Leave supporters, even the ERG, rallying behind Johnson’s deal, Farage alone said it wasn’t satisfactory, “it’s not Brexit”, becoming isolated and stalling so much, he was starting to become the Remainers’ last friend. Wouldn’t that be magnificent, if it were all a cunning plan and he were actually a secret Remainer?

I don’t actually think he is, I think he is just addicted to his position of centre-stage and influence, and it’s understandable after so many years in the limelight, shedding the skin of UKIP when it became damaged goods, emerging Phoenix-like with the Brexit Party and swooping in to steal the European election. He’s clearly a politician for our age, depressing as our age may be. And of course he’s got the Bat-phone hot-line to the White House, which means we ignore him at our peril. The Brexit Party may no longer be fit for purpose, but Nigel Farage will clearly see another day. In the meantime, on social media, ‘Lord Farage’ continues to trend. Noddy may yet make it across the floor of wet paint, slip through the door and head off on another big adventure.