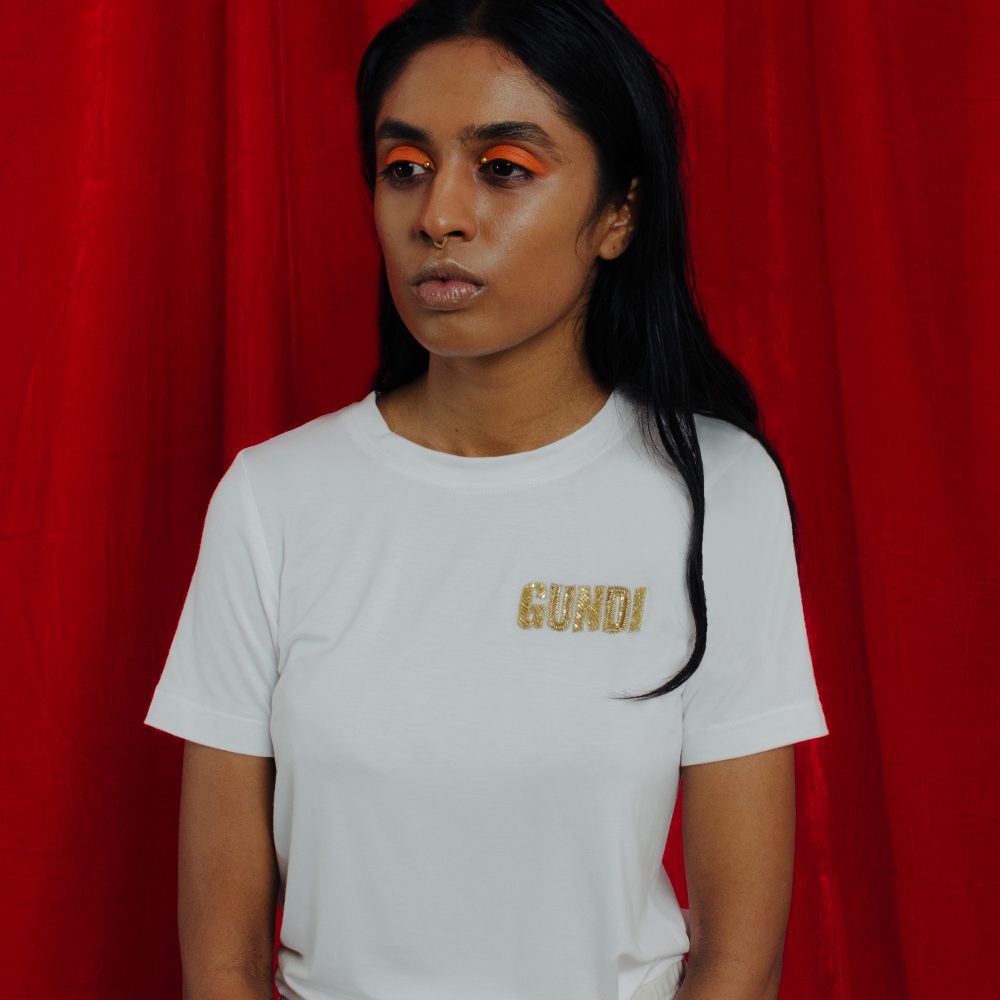 Natasha Sumant is the founder and creative director of Gundi Studios, a slow fashion and progressive media brand celebrating South Asian womxn in motherland, diaspora and beyond.

Growing up in India can leave you surrounded by reductive representations of women. First of all, there is an obsession with fair skin, a product of colonialism that continues to be perpetuated by Bollywood today, as the industry idolises light women and prioritises featuring them on screen. Skin bleaching is a common practice and lightening creams and products are marketed openly, on billboards and on TV ads. You’d hope that even with this single standard of beauty, that there would at least be some variety in the personalities and attitudes of female characters in film, but I haven’t found that to be the case either. Bollywood tends to lean on a few common tropes when portraying women.

Most films have an ‘item number’ which is a musical performance included in the movie that is used to generate publicity in advance of it. These songs usually feature ‘item girls’, actresses dressed and dancing in a sexually provocative way. So you have ‘The Item’ as one trope. You also have ‘The Sati-Saavitri’, or ever-obedient wife or daughter. In Hindu mythology, Savitri was the first wife to commit Sati, a Hindu tradition where recent widows committed suicide to accompany their husbands in the afterlife because life wasn’t considered living without them. While this specific practice isn’t depicted in modern storylines, the general patriarchal idea that women’s roles as wife, daughter, or sister supporting men are their most important ones often is. The Vamp is another trope. It always struck me as ironic that some of the most fabulous female characters in Bollywood driven were these vampy, powerful, villainous characters. Finally, you have the Gundi, or female gangster. Of course, you have exceptions, India has produced many excellent films.

I started my career as an art director, working for major fashion brands and agencies, but in my free time I developed work that unpacked and explored my heritage and progressive politics. One of these early conceptual side-projects explored the Bollywood tropes outlined above; I styled and shot a photo series inspired by the stereotypical depictions of each one. I’ve always been frustrated that there aren’t more nuanced and positive examples of outspoken, independent women in media, both in Indian media and internationally—in the US and UK, South-Asian women are often depicted as demure and conservative—but the ideas I explored in this work meant challenging stereotypes about South-Asian women increasingly became a personal mission for me. I decided on the word “Gundi” to represent my movement. The word technically means “gangster” or “female thug”, but is also used more playfully to describe girls who misbehave or are being bratty, or women who are assertive and “fight back”.

I designed a piece of typography for Gundi and had it embroidered using traditional zardosi techniques onto a patch, and then featured the patch in my shoots featuring and celebrating the kinds of bold and independent women I wanted to see better represented in media. I saw that this work was really resonating with people on social media and so started selling the patches to others to pin onto their clothing and claim the word Gundi for themselves too. I also started buying up vintage jackets and selling those with the patches pre-pinned. When I realised that people preferred buying the jackets over the patches alone, I decided to launch a collection that would enable people to wear their values.

At the simplest level, fashion can empower women by helping them feel better and more comfortable as they move through the world. However, the power of clothing can go beyond that too—what you wear can act as an extension of who you are and help you project your personality and your views and your values to the world. Finally, given that the fashion industry is driven by largely female labour—with women making up the majority of garment workers producing the clothing, on the back-end, the fashion industry can lift up women by providing access to employment and income that enables them to improve their lives.

With Gundi, we’re trying to celebrate women on each of these levels. We make streetwear that’s designed to last and be easy to wear. Each of the pieces in our first collection references a social or resistance movement. Our ‘Azaadi Dress’ is made of khadi, handspun and handwoven cloth that Mahatma Gandhi encouraged people across India to spin and use during the independence movement. Our ‘Suffragette Sweatshirt’ comes in the same green used by the Women’s Social and Political Union (WSPU) in their campaign for the women’s right to vote. We make feminist art and create campaigns that feature South-Asian women of all shades and sizes. And, our products are made in what we call a woman-centered supply chain, which means we aim to work with partners who are committed to not just employing, but to meaningfully impacting women.

It’s been an exciting year for us so far! We launched our online store to take preorders and are taking our collection and art on tour to three cities home to lots of Gundis: Bombay, New York, and London. Our London popup launches next week in Brick Lane and will showcase our feminist films, photo series, and even an interactive installation as well as all out clothes made by and for desi women.

Gundi clothing is designed to outlast fashion trends and made to last by a small and dedicated teams of artisans, embroiderers and tailors based in India. Gundi Studios keeps ancient craft and its surrounding community alive with streetwear-inspired styles that are embroidered using the aari, zari, and cut dana techniques traditionally used on sarees and burkas. Gundi produces a limited number of styles in small batches to build long standing relationships with suppliers, ensure fair wages, and reduce waste. Gundi will be hosting a popup at Studio 220 Brick Lane, London from 3 October to 7 October 2019.

« #Adulting With Chinae Alexander
Boris Has a Problem With Women »