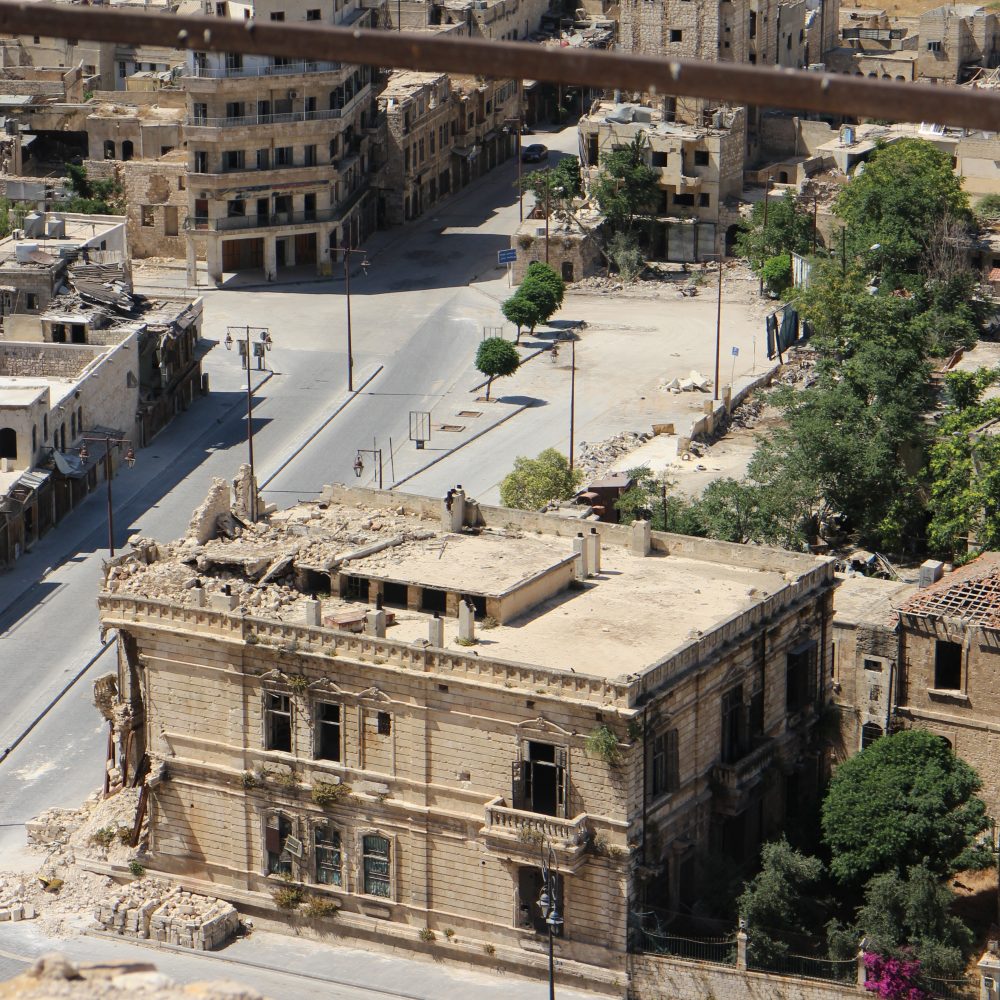 Restless investigates how in Libya, Yemen and Syria, women face down conflict and the patriarchy ﻿

In the nine years following the so-called Arab spring in 2011, Libya, Yemen and Syria have been shaken up by internal and international conflicts that killed millions of people. Women have been particularly affected by those conflicts, but also took part in the change their society is facing by taking on new roles, grabbing the opportunity to become bolder.

From Turkey, Hanan Halimah talks cheerily about her life, that has taken her from the suburbs of Damascus, to Egypt with her family for safety concerns, then to live alone in Turkey from October 2013 after attending a conference.

She had never lived on her own before but was forbidden to go back to Egypt for three years after an Egyptian policy was enacted to ban Syrians from entering the country.

“Before, girls were not supposed to live alone”, Halimah told Restless Magazine. “But now, everything has changed.”

At 37 years old, the social activist works on a project assessing what happened to women in detention in Syria, especially after 2011 with an organization called The Day After. Before the war started, she was already working in Syrian charities. “At the beginning of the Revolution, all of us [women] had to do something because men could be arrested, it was hard for them to move. Women started to go to the demonstrations, move around, help other people. After 2013, a lot of women had to work because they had lost their husband for example, but militia groups [opposed to the Syrian regime] started controlling women too, and then Islamist groups.”

She said she was fearing a backlash against women because of the toughness of the situation back home, notably through early marriage that has increased since 2011, but is also hopeful that more women are aware of their rights.

“Conflict definitely gives a shift in terms of gender perspective but there is not an inclusive political process”, Sarah Brun, program specialist at UN Women, told Restless Magazine. According to the United Nations, out of the 13.5 million people affected by the crisis in Syria, 4.1 million are women and girls of reproductive age, and 48% of 4.8 million UN-registered refugees are female. Assad forces and militias have used rape to torture female, child, and male detainees. But the reality is more complex, and many women have taken this vulnerability to transform it into strength. The uprising has also been notable for the widespread participation of both veteran activists and first-time female revolutionaries, who took over the streets and also media, communication and NGOs. The militarization of the conflict saw their role diminish on the main protesting scene but they have remained active, either by participating more fully in the economy and in associations, in and out of the country.

This is the case of Lubna Kanawati, Syria and Turkey country director for the Syrian organization Women Now for Development, who told Restless Magazine that the Revolution pushed all people, not only women, to challenge traditional norms by finding the ability to speak up for themselves.

Kanawati pointed out all the new roles that women took in her country since 2011: “We started leading others, organizing and networking. Then we started to do health care, take on more service roles and become the family’s breadwinners. We learned how to survive and to work in different ways. The Syrian civil society is more active towards providing safe spaces for women to train themselves or be trained into developing skills that can be useful for the new set of jobs we have now have access to.”

Now 39 years old, she lives in Turkey while her family is in Egypt. She used to be a graphic designer but told Restless Magazine she believes “that the conflict has an impact on society and the view of women”.

Kanawati added: “There are more feminists, women raise more their voices and they also involved themselves politically by being part of popular committees. But this achievement is not sustainable because we are in a volatile situation and many people are displaced and lose the progress made in communities.”

In Libya, women have started becoming involved in the public scene by getting political right away. In 2012, almost as many women were involved in the Revolution as men, mostly in social activism. The political transition after the overthrow of Libyan dictator Muammar Gaddafi even saw women involved as members of the Parliament.

“We suddenly had better female representation, but all of that has changed since the war started in 2014”, Libya Idres, social activist and member of the Libyan Women’s Platform for Peace, told Restless Magazine. Libya is in a state of civil war, with rival militias battling for control of different parts of the country, and has two governments, one in Tripoli and one in the east of the country, both battling to gain support from the myriad of militias. In 2011, Idres was 27 and became instantly involved in the media because she wanted to be able to speak up. After joining the Platform, she had to move with her family to Egypt for safety reasons.

She feels that women are no longer a priority because they are not fighting, but thinks it could also be an opportunity. “Women are not corrupted by the conflict, it’s important so when the time comes to make peace and stabilize the country, they will be able to restructure things. But I’m not very optimistic when I see that women are really at the bottom of the current priorities.”

Idres mentioned three stories that show the toughness of the current situation for women and girls still in Libya, although she speaks for her community only. Before 2014, the legal age for marriage was 22, which got moved back to 18 with an increase of the guardian’s authority to agree for an earlier marriage. Last year, an online gathering of hundreds of Libyan girls led to a full blown movement, which lead to a real life gathering in a cafe in Benghazi, that got stormed by the police after a couple of hours with fake accusations of drugs use and “wild partying”. Another story, recently, involves a domestic violence case culminating in the death of an 18 year old girl named Farah, pregnant and already a mother of two young children.

Another worrying fact is that women who are involved politically seem to be the target of attacks. In July, one of Libya‘s most prominent female politicians, Seham Sergeway, was abducted from her home in Benghazi by an armed militia. An elected member of the House of Representatives, she had been critical of the Lybian National Aarmy’s assault on the capital, Tripoli. In 2015, civil rights activist Intisar Al-Hasairi was also murdered.

In Yemen, the patriarchal structure has always been stronger than in Syria and Libya. Gender based violence and inequality existed from before the Revolution in 2011-2012, and at the beginning of the war in 2015. Since 2006, Yemen has consistently ranked last in the World Economic Forum’s Gender Gap Index, and rates of child, early and forced marriage and gender based violence are extremely high. “Nearly 4 years of war in Yemen has led to the largest humanitarian crisis in the world and women and girls are bearing the brunt of that crisis”, Helena Minchew, gender equality advocacy officer at the International Rescue Committee, told Restless Magazine. “The war has exacerbated pre-existing vulnerabilities and inequalities rooted in patriarchal structures and norms. Violence against women and girls in particular, has substantially increased since the beginning of the conflict in 2014. It is estimated that the rate of child, early and forced marriage has increased of 63% since the beginning of the conflict.”

But it is not the whole story, as women have also started becoming breadwinners and managing their families. “More women have been accessing income opportunities”, Minchew said. “When women are working outside the home instead of men, this can create a shift in power dynamics that leads to a backlash from men that ultimately leads to partner violence.” A situation that doesn’t seem to change as women are unable to access their basic human rights:

“Whether that is because of the violence they face at the hands of intimate partners or armed actors, or they cannot access school or healthcare, or they cannot move and live where they’d like, too many women’s human rights are being violated.”

Suha, a Yemeni student who left her country shortly after the war started and became a student in Egypt, noticed that women “take a huge responsibility in alleviating the economic pressure on their family, through work but also by selling the gold that was given to them for their wedding”. She noticed early marriage increased but said that, at the same time, it was becoming more common to see women outside their house, getting an education and working. “I talked to some friends recently, they told me they see more women driving as well, which is new.”

Libya, Yemen and Syria have faced very different and violent situations since 2011. Although women are among the most affected by conflict, they are also able to grow despite it in order to take care of their own. Trying to build a better future for the generations to come, hopefully in peace.

« Nüshu: A Lost Language and Its Links to #MeToo
So Under Pressure »