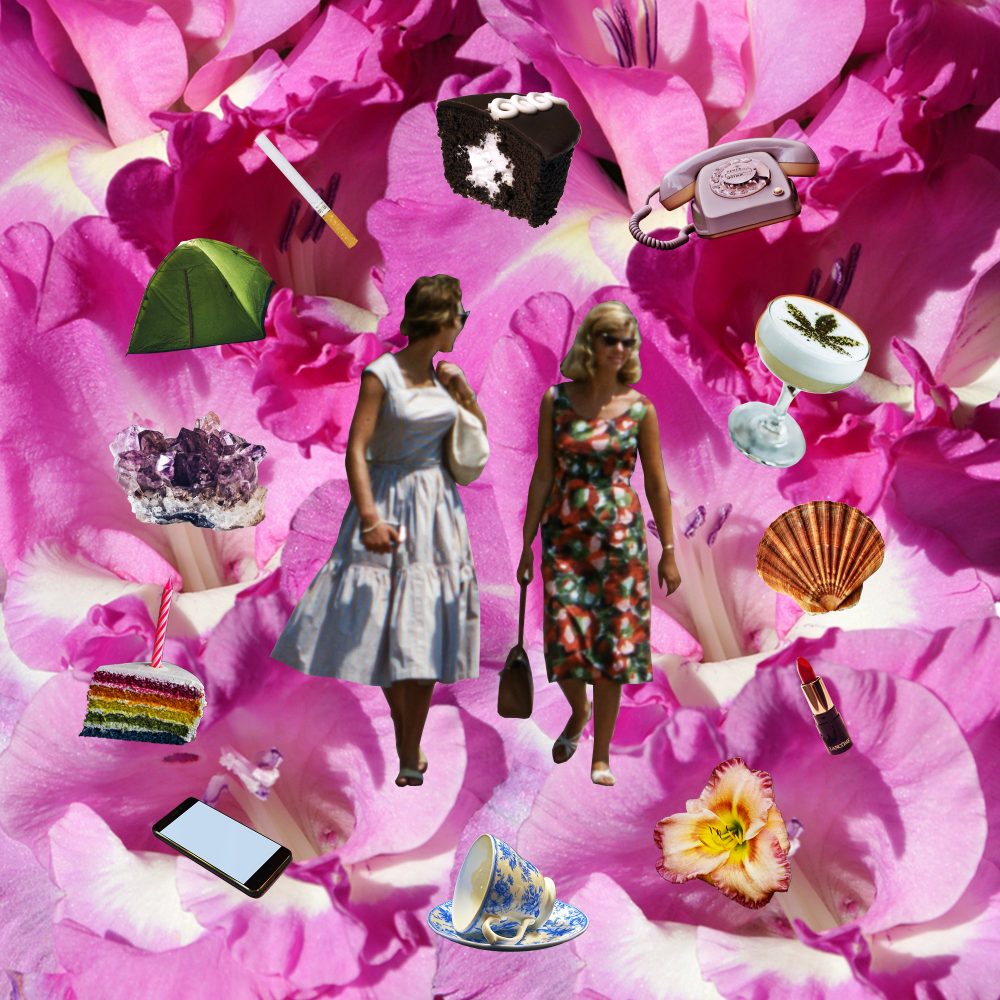 How to Make Friends as an Adult

When people ask me where I’m from, it’s always tricky to answer. I’m what you call a “military brat” – a kid that was moved from continent to continent, surrounded by strange accents and the ever-suspecting eyes of classmates. I remember trying Pom Bears for the first time in an East Midlands primary school, nodding through this extra salty, foreign snack as my chaperone urged me to try another. I remember the yelps of “yuck!” from the diners at my table in the canteen as I tucked into my peanut butter and jelly sandwich. I remember losing my accent in under a month, the way kids do when they’re desperate to morph into their surroundings.

Making new friends has always been something I’ve just had to do. I’m told I’m confident, adaptable, approachable. I can talk to just about anyone. I seem to be able to just pick up my life and start again. While this is encouraging to hear, there’s always been an anxiety surrounding my early, shaky foundations. Just this past weekend, I listened to speeches at a wedding from friends of the bride and groom who had known them their whole lives – “since age zero,” one boasted. It’s a narrative I’ll never know, the kind of connection I’ll never be able to reflect on. I’ll always be the acquaintance, the nice person who just moved to town, forever shaking hands and offering awkward first hugs.

Teenagehood, despite its difficulties, was thankfully a transition that allowed me to forge some of my strongest friendships. While my Dad was shipped off again, my mum stayed behind, meaning I was lucky enough to be in one place long enough to bond over nu-metal and early noughties rom-coms with my fellow outcasts. This is an age where it’s easy to find your people. The ones you’d gravitate towards in English class or sit with for hours, desperate to nail the guitar chords of your favourite song. The ones who’d try to explain how to put in a tampon for the first time or hold your hair back as you puked at yet another house party. The ones who you would immediately turn to after a first fumble with a first love. But of course, as soon as we got comfortable, university called for me to leave, again.

At 18, it was fun to form connections through sickly sweet shots at ear-busting club nights and monotonous Monday morning lectures but, as with almost any academic environment, there was always a kind of competitive backdrop bubbling under the surface. Sadly, most of the friends I thought I’d made for life seemed to have now morphed into an endless stream of Facebook proposal photos, baby announcements and career updates. Thrust into the unapologetic graduate afterlife, we got busy figuring out how to “be adults” and suddenly moved on without each other.

I decided to start working for myself in 2016. While I wouldn’t miss small talk, or having to make seven cups of tea every time I went to the office kitchen, I did start to miss other human beings. Sometimes, I wouldn’t talk to another person until the early evening, by which point I often seemed to have forgotten how to start a conversation. My tongue would writhe and struggle as I attempted to politely reply to the person at the till or the dog walker in the park. Soon enough, changing out of my pyjamas in an attempt to make human connection seemed more trouble than it was worth.

Self employment did mean that I could work from anywhere and this year I found myself moving, again. This time to a small town in upstate New York. I found an apartment on Craigslist, and moved in with a woman who I had met for a brief but encouraging 20 minutes. We figured out where to hang pictures, where to place our food in the fridge, where to buy an umbrella for the backyard before we even sat down for our first, full conversation. I was trusting in my adaptive, approachable spirit but it was exhausting to constantly navigate our common ground. I silently panicked as I found myself in this strange new bedroom, alone, with foraged belongings from the sale at my local Salvation Army.

Desperate to form a tangible ‘make new friends’ plan, I thought of wearing a t-shirt, with the words “Hi! I just moved here and I’d like to make some friends” adorned across the front. The back could list my interests with my social media handles at the bottom in case anyone was too shy to approach me in person. I then thought of the unsolicited dick pics that could flood my DMs or the glowing siren I had created for would-be muggers. Being a woman in a new town was tricky.

A recent study by University of British Columbia psychologist Elizabeth Dunn and her colleague Gillian M. Sandstrom tested whether short conversations with strangers could improve our moods. The kind of interaction that urges us to look up from our phones and chat about the weather with the person we’ve found ourselves in a lift with. Long story short, it does help but how, as adults, do we move past the courteous chit-chat to form a real, nurturing friendship? How do we mimic our wide-eyed 7-year-old selves, who boldly assert that the person we’ve been sharing a skipping rope with in the playground is absolutely, definitely and unequivocally our new best friend?

First, we need to peel back the layers of our own ego. Moving to an entirely new place means I have a lot of alone time and while I can bury my nose in a book all I want, I still have to acknowledge and eventually, cherish my own company. The silence in my unfamiliar apartment quickly became suffocating. I wasted hours tapping through Instagram stories and attempted different hairstyles in the mirror, urging my new identity to magically reveal itself in my reflection.

What I soon realised was that accepting and nourishing the person I already was, was the thing that would lead me to kindred spirits. “I think this stems from us all being at a point in our lives where we know who we are, we know what we want, and – most importantly – we know what we want in a friend,” says author Kat Gardiner, who moved to Detroit in her mid-thirties. “There’s no drama. There’s no insecurity or jealousy or holding you to who you were. Sure, there’s a lot of history to backfill, but learning to embrace kindred spirits as two people on their own path has been a nice surprise I didn’t expect.”

Kat moved around a lot during her adult years and says that it’s all about changing your expectations when it comes to making friends in a new town. “My closest friends in the world are still the ones I made when I was 13. They’re more family than friends at this point. The friends I make now are inevitably going to be different. That’s ok. That’s wonderful. It took a long time to embrace this.”

She made friends after seeking out groups – and putting up with those that didn’t quite fit. Last week, I found myself attending an art show with a woman I’d met in a plant shop. A few days later, I was sweating in a boxing gym with a neighbour I had met just a few weeks before. Two days after that, I was in my first meditation class. By pushing myself into somewhat uncomfortable settings, I’m able to be open and vulnerable – important steps when it comes to forming true friendships and finding kindred spirits.

However, these true friendships don’t necessarily need to be as emotionally invested as the ones we formed as teens. As adults, finding someone who you can have coffee with once or twice a month is as beneficial as finding your new best friend. Sarah Croome decided to go back to university aged 50 and despite her anxieties surrounding the differences with her classmates – “I have a husband, we continued to run a business together throughout this time, I have adult children about the same ages as my fellow students” – she found that that the reality of establishing friendships was surprisingly different.

“I was often kindly invited to events which I declined, due to distance, work, or family commitments, but I never felt this was held against me – my fellow students seemed to accept my situation and often seemed surprised I’d bothered to travel up for things,” she explains. “In turn, I accepted that I wouldn’t have quite the same bonds as they had with each other, and that the slightly on/off, arms length relationships we had were none the worse for it, and were ‘enough’.”

As much as it’s important to seek out new relationships, moving also taught me to put more time into the ones I’d left 4000 miles behind. Relationships take time – especially with the schedule of an adult – and it’s imperative to work on them. Social media means that it feels like we’re always up to date with each other’s lives but as we all know, it’s a reel of highlights, a reel created for an audience of hundreds instead of a conversation created with one. I started scheduling weekly calls with friends back home. I sent a postcard to my 84-year-old neighbour. I made the effort to reply to each ‘how are you’ with a sincere answer.

“Friends don’t fall into your lap. Relationships take work. I have to remind myself to keep in contact with my friends and make it keep happening. Love is a verb,” explains Erin Spiceland, who, six months after her divorce, accepted a job at SpaceX. Moving to Los Angeles from Huntsville, Alabama, she went from work-from-home co-parent with a 3000 sqft house and unlimited vacation time to commuting from her 600 sqft studio apartment to a 5000-person aerospace campus working with the smartest people she’d ever met on the coolest projects she’d ever heard of but, without her beloved girls. “My life turned upside down.”

“Los Angeles is a lot bigger than Huntsville. I had to get over this idea that friends need to live next door. I had to make the effort to travel to keep my friendships going,” she adds. “Two of my friends live more than 30 minutes away. We have to make time for each other. If you’re not willing to spend time on your friends, what are you doing?”

She continues, “Seek out people that you value. Communicate with the people you meet. Ask them what they expect, and reciprocate. To breed something and abandon it is inhumane. Labour at those relationships to the extent that they make you a better person and let them go with clarity and understanding when they cease to be healthy. Let the people in your life know how important they are to you. Don’t be afraid to use the word “love.” Be flexible and forgiving, as long as the benefit flows both ways. Jump.”

I’ve just entered the second month of my new life and when it comes to making friends, I’ve learned to take time for myself. To breathe. To unabashedly declare my devotion to the friends I already have. To know that it’s okay if the “cool clique” in town aren’t taking any new friendship applications. To keep my head high and my heart open to the possibility of meeting someone new and nourishing. To change my expectations of what that new friendship will eventually turn into. To not just embrace alone time but to make time for it too. Once you establish that connection with yourself, you’ll know exactly the kind of friends you need in your life.

« Can Misogyny Be Classified As a Hate Crime?
What’s Pushing Priti Patel? »