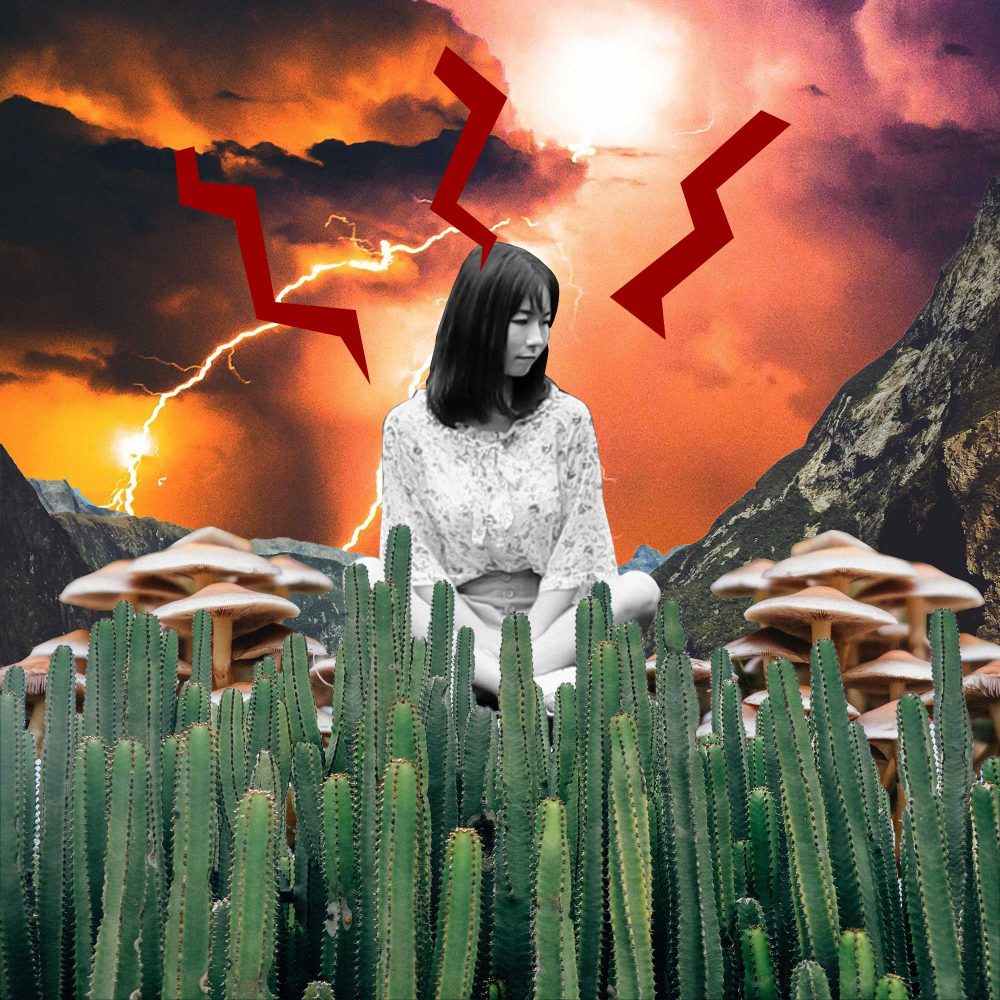 How I Got Rage to Work For Me

What happens if we give our anger the space it deserves? Lisa Kirchner tells her story

It was a random Sunday afternoon last fall, around the time Kavanaugh was to testify before congress. What started as a little get together with a dear friend had suddenly turned into a dinner party after a neighborhood couple learned we were entertaining and, over salmon and corn on the cob, the conversation turned to the hearings. Living in a haven of artists, performers, poets and playwrights, I assumed we’d all be on the same page. I was wrong.

“If something really happened to that woman,” one of the aforementioned dinner crashers interjected, “she would’ve come forward years ago.”

Rage, my once full-time lover, spiked within me, but I took a deep breath, remembering that learning to effectively deal with my anger didn’t mean it was gone. The difference nowadays is that I didn’t have to duck the woman on the street afterwards.

“No,” I said. “You don’t get to say that. As a sexual assault survivor myself, I can tell you it rarely works that way. I never said a word for twenty years either. That doesn’t mean it didn’t happen. And if his general behavior back then is any indication, well, that’s exactly the kind of guy who raped me.”

Responses of this kind, hiding neither my anger nor my truth, have taken many years to cultivate, in part because I had previously internalized the message that an angry woman goes unheard. And frankly, I saw anger punished in the corporate world, where I wanted to succeed.

For years I had tried to hide my rage, before realizing this is, in fact, impossible. My feelings were a secret to no one but myself, festering until they popped, boil-like, spewing out at the worst possible moments and leading to new miseries. I knew I had a rage problem, but I had no clue how to solve it.

First up, I turned to meditation in search of my inner Buddha. But the only being I found was my inner bitch, and she was pissed. Growing more desperate, I went on a 10-day silent meditation retreat where, besides silence, there was no reading, writing or even snacking to distract a person from their internal monologue. Going into it, however, I didn’t know this, so I spent my stay sneaking around, ferreting out paper and pen in the privacy of the bathroom and journaling as I chewed on illicit Graham Crackers.

One day in the stall, having spent a while writing down hypotheses on my failed marriage, I was brushing my teeth when I spotted a fellow meditator out of the corner of my eye – a woman I’d nicknamed Lotus Pose for her irksome habit of enduring hours-long meditation sessions cross-legged while I could barely stay seated. In fact, I was limping still as I hobbled out of the bathroom just in time to see her joined by one of the men. ‘Lotus Pose came to a silent meditation retreat with her boyfriend?’ I fumed, my mind filling in the details. ‘They’re probably going to talk and have sex right now. Loser! That is totally against the rules,’ my mind raged, as I shoved my toothbrush and toothpaste into my pocket, breaking my Graham Crackers. The irony was not lost.

And that’s when I lost the pretense of superiority. The whole reason I’d come to this meditation retreatwas to figure out how I’d torpedoed my marriage. I was sure I was to blame, and thought if I could just figure out what was wrong with me, why I was so angry, I’d stop repelling people I loved. But while part of my anger in that relationship came from the fact that I was with the wrong person, an even larger part stemmed from feeling that I didn’t have a right to my anger. Worse yet, I made no distinction between thinking I was in the wrong and believing something was wrong with me.

At the time, seeing Lotus Pose break the rules sparked a deep desire to best her. I wrote in my journal, “I will outlast this chick. See? Anger can be a good thing.”

This became an opening, an invitation to recognize that my anger could be useful. Not that I took it. I didn’t even understand that I needed to befriend my anger until I heard a talk by the Buddhist teacher and psychologist, Tara Brach.

Brach gave name to the loop I was in, calling it “the trance of unworthiness.” She said we could end this cycle “of blaming, striving and self-numbing” by monitoring our emotions mindfully.

‘But how am I supposed to be mindful when I hit def con rage so regularly?’ I pondered.

In fact, all Brach meant was that I needed to take experiences less personally, that I was trapped by the spell of the stories my mind told incessantly. Escape, when it finally arrived, came through a cult.

I spent a few years travelling back and forth between New York City and various destinations in India, morbidly obsessed with fault-finding. I had plenty, so it kept me busy, but it wasn’t exactly turning me into a paragon of calm. That’s when I met Jodi, a yoga teacher in Goa who not only ran her own business with her hot husband, she radiated a peace I could only hope to achieve. One day after class, I sidled up to her.

“What you were saying about treating external cues as data really resonated with me. Though I’m not great at not taking things personally,” I mused. “A mosquito can bite me and I’ll think, ‘What did I do to you?’”

Jodi laughed. “Oh, me too,” she said. “But with some help, I’m learning how to quit doing it.”

“Where do you get help?”

Well now she had my attention. As soon as possible, I joined her at what was called Balanced View, a live-in compound where classes and lectures were regularly given. Made up of several buildings, the place was surrounded by tall palms and gardens. There was a large dining area out front, all vegan all the time, but complete with an espresso bar. No doubt about it, this place was a cult.

We joined a session already in progress, where a woman with curly dark hair sat on a stage and talked about ‘open intelligence,’ saying it was effortlessly inexhaustible.

“Just stop thinking for a moment. For the briefest moment, allow yourself to be exactly as you are, and sense what you feel when thought is not present. What remains? A sense of alertness. A sense of stability.”

She went still. I looked around, Jodi’s eyes were shut. Other people were closing their eyes, so I did the same, and tried to stop my thinking as I’d learned to do in meditation. Compared to sitting in silent stillness for hours at a time, letting go of my thoughts, worries and concerns for just a moment was actually doable.

This cessation couldn’t have lasted more than a second or two, but in that short time, what I clearly sensed was optimism.

‘That’s my baseline!’ I realized. Everything else was just what I piled on with stories.

“We recognize alertness and stability. Clarity,” the speaker resumed, in what sounded like an Israeli accent. “The power to know. Open intelligence.”

Inbal, as I’d soon learn she was named, told us to keep doing this practice as it occurred to us. “Whether it’s once a day or once a week, it’s fine. Start where you are, take short moments, and see what happens.”

Of course, I’d heard such suggestions before. You’re perfect as you are. You’re pure love. Blah blah. But this teaching provided a distinction I could grasp—there was a baseline self, separate from my ego, which was unbroken and in no need of alteration. At last, I’d found my inner Buddha – and fortunately, nothing terrifies me like communal living and veganism, or this might be a very different story.

Finding that I could trust my feelings instead of making them wrong changed everything, and it began almost immediately after I started to “take short moments.”

Later that same day, after my first visit to Balanced View, a shopkeeper in Arambol quoted me an exorbitant price for a pair of flip-flops. My first reaction was anger – I hated being seen as a wealthy American, even if, relatively speaking, I probably was. Usually this kept me from bargaining, because I didn’t want to come across as angry.

This time, however, I took a deep breath and connected with how it felt to be in my body. Joyous. I could share that, and still ask for what I wanted. Without thinking about it further I simply smiled and asked, “Now tell me, what’s your friendliest price?”

Minor though it was, it felt like a triumph to negotiate without bad feelings on either side. Maybe I could see my emotions for what they were – indicators – and respond in a way that respected them, without making anyone wrong.

The lesson I learned, and which I have continued to work from, is that ignoring feelings doesn’t make them go away, it just makes them intensify. I used to believe that the opposite was true. That my feelings lied to me. But that was never the case. It’s my thoughts that are the liars. And, for what it’s worth, the neighbor never did confess to being an idiot, and Lotus Pose’s ‘boyfriend’ turned out to be gay.