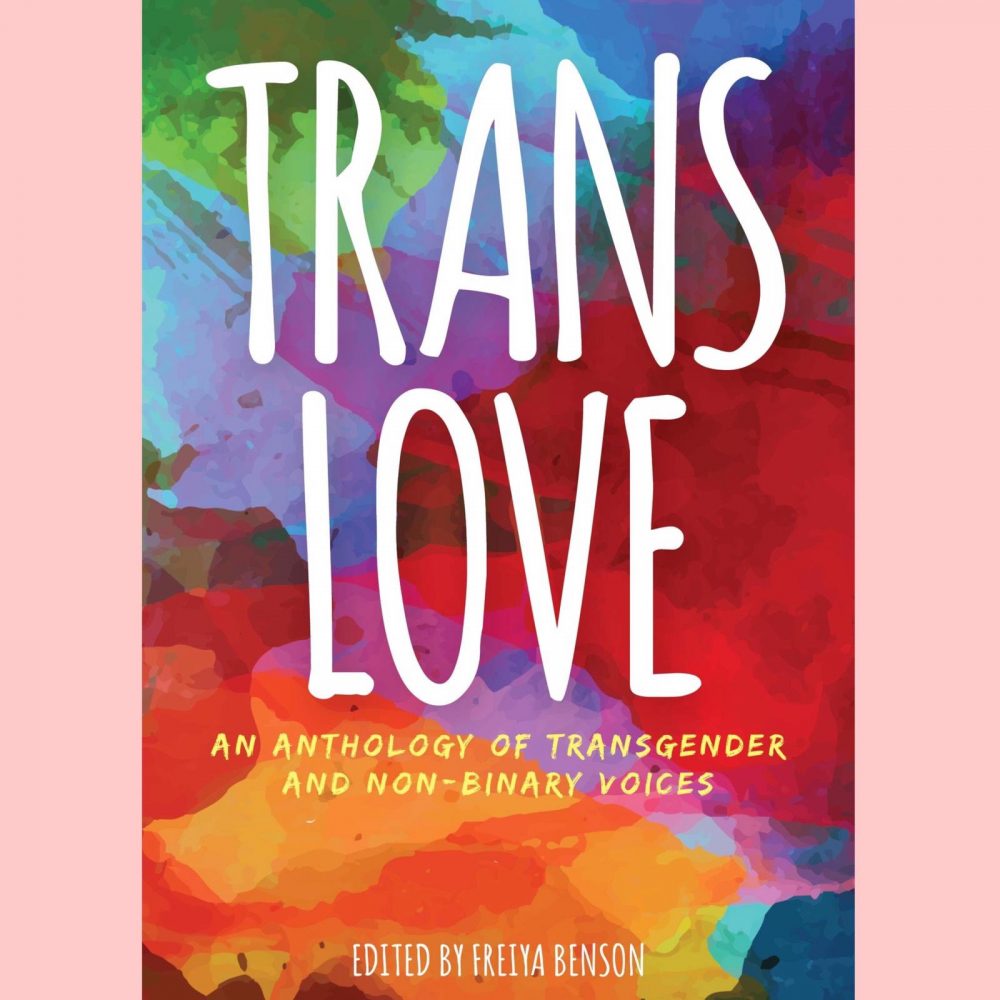 There’s no doubt that trans identities have come under attack in the UK in recent years. Just take how trans hate crimes rose by 81% in the past year alone. Or how nearly half of transpeople have attempted suicide while 70% avoid certain places for fear of being assaulted. Meanwhile, transphobia has become a mainstay of the right-wing press, with one newspaper running a full-page ad attacking trans rights reforms while others likened being trans to a ‘lifestyle choice’ and trans kids receiving treatments akin to a ‘live experiment’.

So it’s never been more pressing to celebrate the oft-overlooked lived experiences of transpeople beyond tragedy – at least, that’s the premise of ‘Trans Love’, a new anthology of essays on trans love from Brighton-based writer and transwoman Freiya Benson. Penned by over 30 writers identifying as trans and non-binary from the UK and beyond, the book celebrates love in its all its forms: familial, friendship, romantic, ally, spiritual and self-love.

Featuring contributions from the likes of trans Muslim activist and co-founder of Trans Pride Brighton, Sabah Choudrey, and Alex Iantaffi, a non-binary author and co-host of the Gender Stories podcast, each of the entries across poetry and prose are uplifting and quietly devastating in equal measure, be it exploring how dating apps present new challenges for trans people to the first-hand impact street harassment can have on trans people’s loved ones.

Trans Love’s greatest strength is how it distances itself from the tragedy and sensationalism that’s come to define the trans experience this decade. With that in mind, we sat down with Benson to discuss what it means to be trans today, the challenges transpeople face navigating love and relationships in a hostile climate and why, above all, trans people are deserving of love.

Trans identities have been hijacked by hateful rhetoric in recent years. How much did that influence you to create and put together Trans Love?

It definitely influenced it. I first came out publicly as trans in the very early 00s and it feels to me, and other transpeople I’ve spoken with, that things have got progressively worse in terms of the amount of hate levelled against us. It can really start to get to you after a while, no matter how hardened you try and make yourself to it. I really wanted to at least try to do something to counter that a little. I remember reading yet another awful article written about trans people and I thought ‘why is it that I don’t ever hear my voice and the voices of people I know in what’s written about us? Why aren’t we allowed to speak our truths?’. That feeling, and wanting to do something about the powerlessness that comes with that feeling, helped sow the seeds of Trans Love.

Trans Love distances itself from the tragedies that have come to define the trans experience this decade. How much was this intentional?

Seeing a constant stream of hate and negativity about who you are is soul-destroying. It seriously affects my mental health and I know I’m not alone in this. I often have to take long breaks from the news, social media and the world because I know if I don’t, it’d eventually get too much for me to manage. Making something positive and written by actual trans people felt like a way of stemming the tide of hate that so often threatens to engulf us.

We’re regularly told as trans people that we’re not deserving of love and that to love us is wrong. This has very real consequences as we’ve seen with the case of Maurice Willoughby, [a cis-gender man in the U.S.] who took his own life after experiencing horrific abuse from other people because the woman he loved also happened to be trans. Every time this happens, every time another trans person is murdered and every time someone who loves a trans person is pushed to the edge because of other people’s hate, feels like another bit of all of us dying. It’s brutal and cruel and as far from love as you can get.

I wanted Trans Love to acknowledge this because it’s become a huge part of our history, both in the past and currently but I also wanted to be able to celebrate our love as well because it so often feels like literally no one else is.

I love how your book celebrates love through a wide lens: familial, friendship, spiritual and self-love. Was this intentional? I find it interesting that sex and romantic love is often celebrated above these.

Yes, very much so! I think sex and romantic love are often prioritised above other forms of love and so I wanted to maybe shake that up a bit! Love is such a huge thing to talk about and it felt useful to try and break it down a bit into more manageable chunks [in the book] so that there could be more focus on self-love or friendship, for instance. Our society often has what could almost be described as an obsession with romantic love and it’s important to show that actually, there’s other ways that love can be a part of your life. I think that for us as transpeople, this is really important, especially right now.

I guess as well all these aspects of love are very much connected. It’s much harder, for instance, to have good experiences of romantic love if your self-love is at rock bottom and you feel isolated and alone. In order to really get to grips with love, we often really need to look at the bigger picture and start talking about all the aspects, rather than just the obvious one.

Right from the start, I wanted to make sure that the contributors in Trans Love were reflective of our community and the diversity within it. I wanted to prioritise voices that weren’t always represented or heard so I actively sought out contributions from PoC, neuro-diverse people, faith communities and so on. It feels essential that the voices we hear from the trans community are diverse and that marginalised groups are prioritised. I know sometimes that this is hard to do as just being trans means that all of us are part of a marginalised group. But I also think that making sure we look at this from an intersectional point of view is really important and that those of us with more privilege use that to make room for those who have less.

I love how unapologetically diverse your contributors are. Was it a conscious decision to include such a diverse selection of writers?

Right from the start, I wanted to make sure that the contributors in Trans Love were reflective of our community and the diversity within it. I wanted to prioritise voices that weren’t always represented or heard so I actively sought out contributions from PoC, neuro-diverse people, faith communities and so on. It feels essential that the voices we hear from the trans community are diverse and that marginalised groups are prioritised. I know sometimes that this is hard to do as just being trans means that all of us are part of a marginalised group. But I also think that making sure we look at this from an intersectional point of view is really important and that those of us with more privilege use that to make room for those who have less.

Do you hope Trans Love might change attitudes of what we’ve come to associate with trans identities in recent years?

I think that’s something a lot of writers aspire to, especially when it comes to writing about something that’s stigmatised or misunderstood. I know that in my lifetime, how we’ve seen trans identities has changed hugely and I also know that it’ll continue to change, be it in the ways that we talk about transness and the language we use or in terms of how other people see us as well.

I want to hope that by hearing about trans people’s experiences, that it might at least make people think about their own preconceptions and it’d be amazing if it helped them change their views as well. I know that changing what we think is really hard but it isn’t always a bad thing necessarily.

I’d love to think that as there’s more information, writing and visibility out there, we’ll eventually get to a place where being trans is just another thing some people are, in the same way that some people are blonde or left-handed.

Why is now an important time for readers to hear these stories?

It often feels to me that we live in a very large but also very lonely and often angry world sometimes and finding your community or tribe can be really hard to do. I think that by sharing stories, we can find community and maybe begin to understand each other a little more than we might have otherwise. I talk a bit more about this in the book but I’d like to believe that love is one of those unique things that everyone will experience at some point in their lives. Although everyone’s experience will have some variation, there’s that common ground and with that comes an understanding and relatability.

I think that once we start to understand other people’s trials and triumphs, we also start to see them as actual people, just like us, which in turn can push back against the loneliness and disconnection we can sometimes feel.

Ultimately, what do you hope readers will take away from Trans Love?

I guess the ultimate message behind Trans Love is that we, as trans people are deserving of love, be that from our families, or our partners, or ourselves. I’d hope that trans people will take from it what they need, be that knowing that they’re not alone, that love is out there for them or just that they’re amazing. I hope that the stories within the book help to paint a more colourful picture of love than we’ve previously been told about and that the experiences and feelings they bring up help us all to see each other as a little more human.

I think giving space and time to allow people to understand our differences and see them not as a threat but as something to celebrate is so important right now and I hope that Trans Love helps with that process.

Trans Love is out now in paperback

« Jennifer Arcuri is Not Ashamed
Anti Abortion Laws Outside the West »