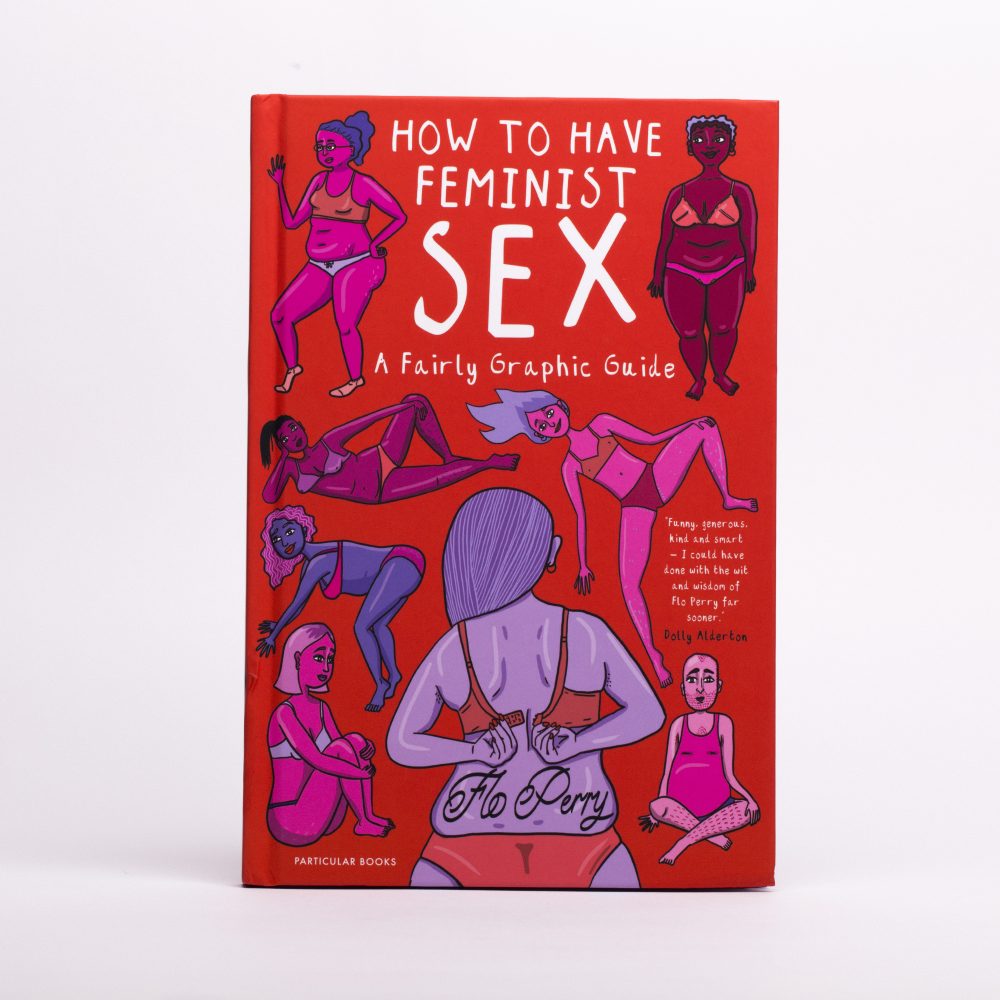 Flo Perry’s ‘How to Have Feminist Sex’

Alice Snape Interviews Flo Perry on her new book, ‘How to Have Feminist Sex.‘

“The problem is, we don’t choose what we believe. Throughout our lives our parents, the media, our mates, and school all plant beliefs in our heads that may not be true,” writes Flo in the opening pages of How To Have Feminist Sex – which is an illustrated guide to help you decide what you actually want, learning to love your body and have a guilt-free sex life. It’s a revelation that I wish I could have had in my life sooner.

“Being a feminist in the bedroom is hard. Feminism is great, but it’s not much of a turn on. Lots of women would rather be picked up by a man, thrown on the bed and dominated than give a lecture on equal rights before sex. And that’s totally fine,” Flo writes, and I think I want to be her best friend.

I call the 27-year-old illustrator and writer on a rainy Wednesday morning from the comfort of my flat and I wonder if she can feel me blushing through the phone. I’m an empowered 36-year-old women who loves having sex, yet I am still embarrassed to talk about it with someone who has written a whole bloody book on the subject! But why do we all feel like this? “Because it is embarrassing,” Flo laughs, and she’s right, we’ve got centuries worth of shame to get over. “On some level, everyone is embarrassed to talk about it. Dismantling all of that is tricky but important work.”

And her book will certainly help with that mission, she is drawing on her own personal escapades, or “field research” – she proudly calls herself a slag – vast amounts of reading and years spent as an editor at Buzzfeed, creating illustrations like this guide to lesbian sex. “My book is pretty and it has substance,” explains Flo, who wants the book to be accessible. Our conversation is punctuated by fits of giggles, and I confess that I feel like I can tell her anything. It’s like her book crawled into my mind and answered every single one of my insecurities about my body hair (“at least once in your life, grow your bush to it’s full potential”), my love for BDSM (“what’s fine in the bedroom might not be acceptable in the boardroom”) and my cellulite-dimpled thighs (“don’t beat yourself up if you have a negative thought about your body”).

“It’s a life’s work,” chuckles Flo, when I tell her I still don’t know what parts of my beauty regime are actually for me. “Knowing what you actually want to do, and knowing what you’re doing because the patriarchy tells you that’s the right thing to do is a really blurry, hard line to work out. Do I actually want to shave my legs? Or am I doing this to fit in with traditional beauty standards that I am surrounded by? There’s no easy answer. It’s all experimenting and seeing where you feel most comfortable,” Flo advises.

And when exactly will we ever get over our body hang-ups? Fear of what we look like can inhibit our sex lives. I’m sure we’ve all been there at some point. Our thoughts consumed by what our stomach rolls look like from that angle when we should be caught in the throes of passion. How can we switch off that negative part of our brain? “Talking about it helps, especially with the person you have sex with,” Flo assures me. “Knowing that lots of people feel like that is useful, too. Feeling that fear and thinking ‘fuck it’ and doing it anyway and realising that everything is okay is really empowering.”

I was at school during the ‘90s when sex education was pretty much putting condoms on test tubes and learning about where babies come from. I was taught that “foreplay” was the build-up to penis-in-vagina sex. It wasn’t, really, until I was in my 20s that I was like, what? Surely foreplay IS sex? “I am lucky, I have had relationships with both men and women,” Flo, who is bisexual, tells me. “What straight people have always called foreplay, lesbians have called sex. In the movies, it’s all about male pleasure and that’s not for everyone.”

“For centuries, sex was for men and to make babies, and not just for enjoyment,” Flo continues. “Throughout cultures, there’s this virgin/whore complex, women are either one or the other. It’s hard to just be a ‘normal’ woman who likes sex.” Flo has hit the nail on the head yet again. I can’t help but think back to my school days, when girls were either “frigid” or a “slut”, while boys were patted on the back for racking up their numbers. One of my most shameful teenage memories was “failing” the so-called nervous test (when a boy runs his hands over your body until you get “nervous”) at the back of the school bus. Years later, when I was experimenting with one night stands and multiple snogs of an evening, I was derogatorily called a “slag.” Seeing Flo proudly reclaim the word is empowering, and I wish I could tell my teenage self to do the same.

I also have to ask Flo about Love Island, which she admits to watching (it’s also my guilty pleasure), surely it goes against the feminist thread of her book? “It’s a mythical universe where fat and gay people don’t exist,” Flo retorts, as she is interrupted by my doorbell (more on that later). When I return, she continues, “I know I am a self assured, woke person and it is just that for me, it’s entertainment. I have actually sent my book to some of the Love Island contestants, including Maura.”

I ask for Flo’s take on that “slut-shaming” moment, when Maura asked Tom to go into the hideaway with her and she overhead him say: “It’ll be interesting to see if she’s all mouth”. Flo points out how problematic the whole exchange was. “It’s a double-edged problem, yeah that was a disrespectful way to talk about women, but also the fact that Maura took such offense at it is also kinda shit – it’s bad that she reacted that she ‘would never put out.’ It was all depressing. It would be nice if women could have sex on Love Island without fearing that their lives might be ruined or that it was a massive source of shame.”

But Flo has a warning: make sure what you’re consuming is varied. “Don’t just fill your feed with Love Island contestants, fill it with people who are bigger or who look more like you and who celebrate that and talk positively about their bodies. That is one of the easiest ways to start loving yourself a bit more,” she tells me. “And know that they’re not necessarily happier than you just because they have a flat stomach – that’s a huge capitalist myth. No one is not gonna shag you because you don’t look like a Love Island contestant, people’s standards are different in real life.”

And I have to ask her about her parents, the infamous Grayson and Philippa Perry. I mean, her psychotherapist mum has just written a book about parenting (The Book You Wish Your Parents Had Read) and her artist dad makes pots about Brexit. Should the Perry family just take over the world? “I can’t say anything about that,” Flo says, not wanting to dwell on her parents. I don’t blame her, but does she remember ever having “the chat”? “I don’t remember, but they were really open, not in a creepy way, sex was just never a taboo.” But as liberal as your parents might be, do they all sit around the dinner table talking about it? “If you’re going to do something meaningful you kinda have to pretend your parents are dead to get over the embarrassment,” Flo says, with a hint of playfulness in her voice. “I don’t think we should all be discussing our sex lives in detail with our mothers, I’m not going to be doing that any time soon. It’s fine for that to be cringy, it’s just the natural order of things.”

But before I go, I admit that the doorbell was the serendipitously timed delivery of my new Lelo Sona Cruise, which I bought inspired by reading Flo’s words of wisdom. “That is so poetic, I love it,” Flo congratulates me. “I hope you have a great afternoon ‘working from home’.” Flo teases as I hang up. But, really, everyone who is having – or wants to have good – sex should read this book, put it on the school curriculum and move the Perry family into number 10 I say.

How To Have Feminist Sex: A fairly graphic guide by Flo Perry is published by Particular Books on 3 October.