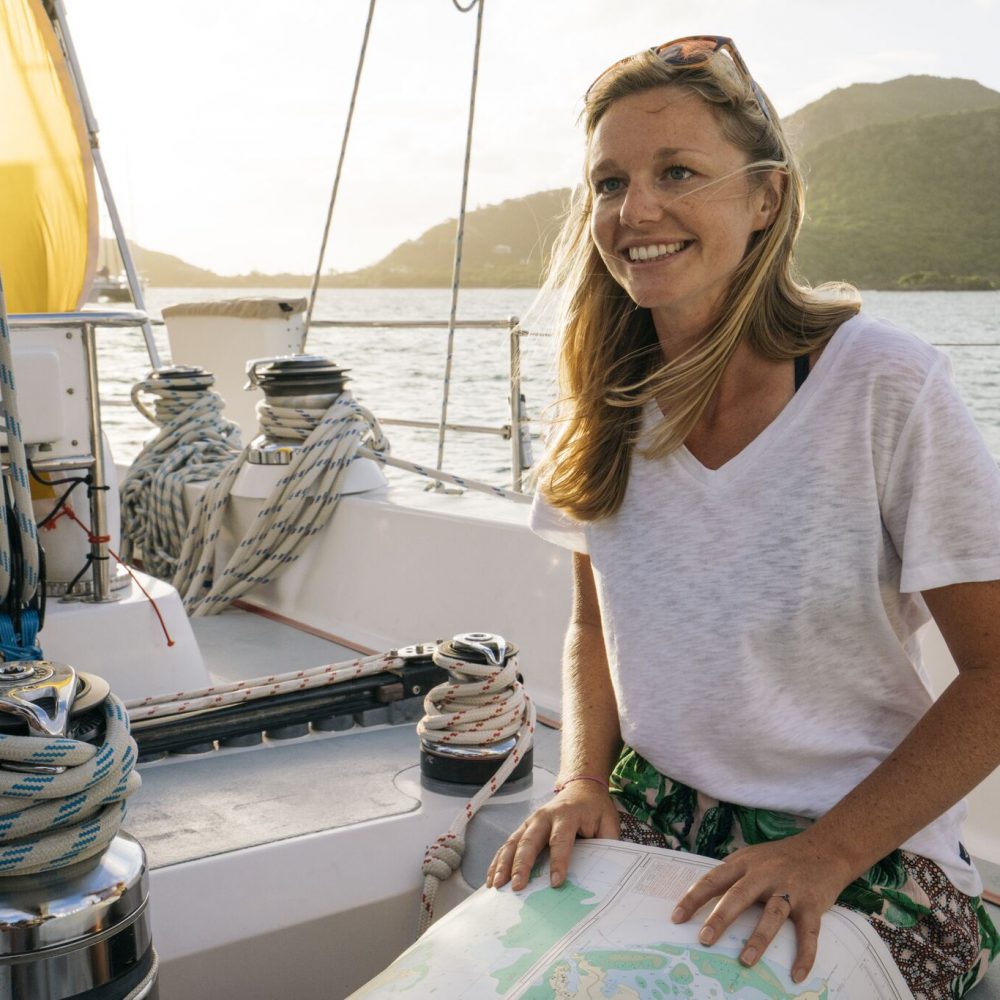 Emily Penn Is Using Female Power to Help the Ocean

Emily Penn was banging the plastic drum long before tote bags were trendy and KeepCups were commonplace. In fact, it was over a decade ago when Penn was first alerted to the plastic problem in our oceans. Freshly graduated from Cambridge with a job at an architecture firm lined up in Australia, Penn was searching for a way to make the long journey without taking a plane. Having grown up on boats, Penn joined a crew on board Earthrace, the world record breaking powerboat that circumnavigated the globe on 100% biodiesel. “Travelling across the Atlantic and Pacific oceans, I never expected to find plastic when I jumped into the seemingly pristine waters,” she told me. “It was shocking to find vast amounts of plastic packaging washed up when we stopped at uninhabited islands, much of which was printed with languages from the other side of the world. My problem solving architecture brain kicked in and I knew I needed to do something.”

Her architecture job was put to one side and Penn’s career took a different turn. Firstly she focused on plastic waste clean up projects, mainly on beaches, and then ocean expeditions to study gyres, the areas in the sea where the plastic waste collects. During these trips, she has seen up close just how bad the problem is. “The most shocking thing is how small the pieces are. Often when looking out at the beautiful blue ocean you think surely there isn’t going to be plastic in there today. Then you take the trawl – a large net – through the water and bring up a sample that’s got 500 pieces of plastic in it. That equates to half a million fragments in a square kilometre.”

Beyond the quantity of these microplastics and how widespread the issue is, it’s how poor communities are being disproportionately affected that quickly became strikingly obvious. “In small island communities, commercial fishing has destroyed fisheries while rising sea levels has made the soil too salty for crops to grow. Instead, they’re forced to import food that is heavily packaged in plastic. Simultaneously, companies predominately headquartered in the West continue to sell overly packaged produce and profit off it because it’s cheap and easy when it’s actually pretty irresponsible.”

Fast forward to 2014 and Penn’s ocean plastic research took a different turn when she took a blood test to discover whether some of the chemicals she was finding in the ocean had made their way into her body. “After testing for 35 banned toxic chemicals, it turned out I had 29 of them in my blood,” Penn explained. While these chemicals didn’t pose immediate danger, the research made for scary reading. Some were carcinogens (substances that can lead to cancer) while others were endocrine disruptors (chemicals that can interfere with the hormone system in the body). It was this second element that particularly worried Penn, especially considering how these endocrine disruptors were affecting women’s bodies. Not only can they cause hormone related problems, they pose further issues with pregnancy. “Having those chemicals inside us during pregnancy is bad news for the development of a child. Finding out that we can pass these chemicals onto the next generation via giving birth or breastfeeding was a scary moment for me.” Much like many areas of female health, research into this topic has previously been pretty limited. With men making up much of the medical workforce historically, there’s still an imbalance in research – something Penn is keen to tackle.

The gender health gap wasn’t the only reason that Penn co-founded eXXpedition – the organisation that runs all-female research voyages to tackle ocean plastic pollution – in the same year. eXXpedition (the double ‘X’ represents the female chromosomes) is also about promoting women working in STEM (globally women only make up 13% of the science, technology, engineering and maths workforce) as well as in sailing, traditionally a male dominated sport. Additionally, Penn speaks passionately about the power of bringing women together to tackle huge problems like the plastic crisis.

The upcoming round-the-world eXXpedition, the eleventh they’ve organised and the biggest yet, will see 300 women join the team throughout different legs of the two year journey. Coming from a diverse range of disciplines, backgrounds and nationalities, Penn highlights the importance of different perspectives when solving a complex puzzle like plastic waste. “There’s no silver bullet but hundreds of answers. We will only crack this issue through numerous elements: legislation, innovation of materials, system change and so on. We need people from different skill sets and backgrounds to tackle the problem in a different way.” Seeing it as a global issue is important too. “We have one ocean; the earth doesn’t know political boundaries. The response needs to come from a global perspective and bringing women together to share their different perspectives is therefore really important.”

Despite the seemingly depressing conversation about plastic, Penn is inspiringly optimistic. “When you’re at sea it becomes quickly apparent that the problem is made up of lots of micro actions – one flip flop or one toothbush – and the answer is also in those micro actions,” she explains. Minimising your use of single use plastic is the first step we can all take. “Especially for those items that are in our lives for an hour or maybe half a day,” she notes. Aside from switching up our purchasing choices and using refillable materials as much as possible, Penn is keen to emphasise the role everyone has to play. “We all have influence that we might not have registered yet, whether it’s through our job, home or social setting. With eXXpedition, we ask our participants: ‘What is your superpower?’ and how can you use your expertise and influence to instill change. I encourage everyone to do the same.”

« What is Happening in Northern Ireland?
We Don’t Need to Know it All »