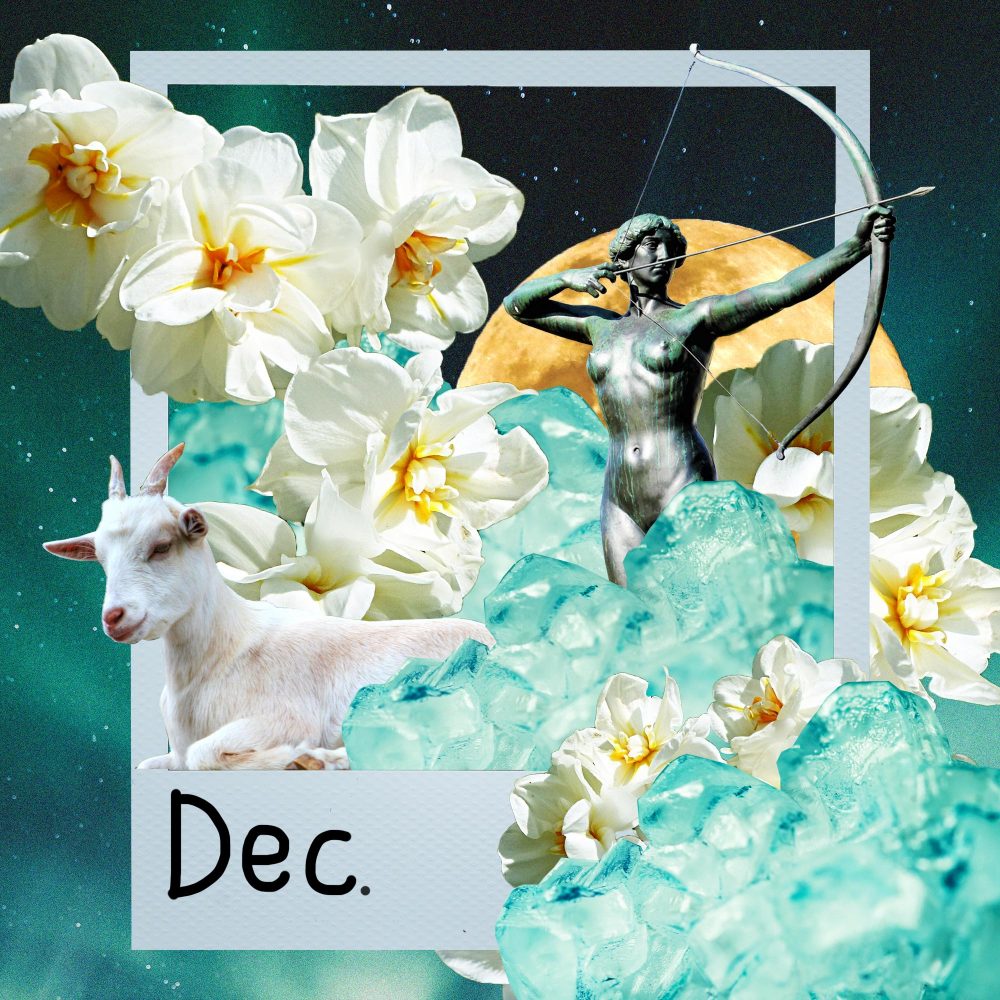 Wanna know what’s in store for you this month? We wrap up the year with our advice from the stars.

Well, I think we’re all glad that’s over. Mercury is out of retrograde and we’re officially allowed to listen to Christmas music, and I’m happy to tell you that there are exciting things happening in the stars this December. We’ve got a busy few weeks as we build-up to the holidays, and we’re all likely to be feeling a little more stressed out than usual, but I can tell you that we’ll be ending 2019 on a high.

On the 26th, for example, there’s gonna be a simultaneous new moon and a solar eclipse! This is a pretty rare combination, and it means the effects of the new moon will be felt for the next six months (instead of the usual four weeks). The changeability of the new moon normally brings new beginnings, but as we head into 2020 that’s magnified by the solar eclipse – not to mention the interaction between lucky Jupiter and optimistic Uranus. This gives us a serious boost as we head into the new year, making it the perfect time to start setting practical goals and planning for the future. Thanks to the eclipse we’re all going to be feeling pretty lucky for the first half of 2020, and be flush with happy coincidences. Perhaps you’ll find your soulmate or land that dream job – either way, we’re heading into the new year with one of the best possible astrological influences.

With that little bit of luck and some hard graft, we can use this energy to carry us forward, but first, we still have December to get through. Keep reading to find out what the stars have in store for each of us!

First of all, happy birthday! We’re well and truly in Sagittarius season, and I think the rest of us are a fair bit jel of your optimistic nature. You’re probably feeling a little sluggish as we move into December, but it’s no surprise considering how much fun you were having in November! You might be feeling a little lost and low-energy as we start the month, but around the 13th your luck will start to change. Watch out though, as people will be taking note of your behaviour – so maybe try not to drink an entire bottle of prosecco at the office party this year…

Ooh, get you Capricorn! You’re looking at a romantic festive period, with luck in love but also your work life for much of this month, while Jupiter’s influence in the first half of December should bring you good fortune and a well-deserved confidence boost. Around the 18th to the 21st is your time to shine, with all things romantic likely to occupy a good amount of your mind. You should also start thinking about what long-term goals you’d like to put in place going forward, as when the sun moves into your sign you’ll really wanna see some tangible results. Enjoy yourself this month, but don’t forget to plan for the future.

Poor Aquarius. You’re probably still feeling the lingering effects of Mercury retrograde and the November new moon, and are likely to feel a little unsteady in the beginning of December. Try not to get too stressed about the festive period – take a deep breath and try and practice flexibility (mostly of the mental variety, but a little yoga never hurt anyone). Try not to make any impulsive purchases, and just ride that wave of stress through December. The second half of the month is looking much better for you, with socialising and romance on the cards and that solar eclipse/new moon combo is going to really give you that boost you need. It’s telling you that NOW is the time to pursue your goals, so go out and get what you’ve always wanted.

It’s all going swimmingly for you right now, with the moon in Pisces for the beginning of December, and then moving into your personal finances sector. You’ll be feeling pretty savvy with money (probably got your Christmas shopping done already haven’t you?), but you may start stressing out a little by the end of the week. You’ll be feeling better by mid-month, so let your hair down and have some fun around the 13th and 14th for party season. You’ll have increased intuition around the 24th, so if you’re getting a gut feeling about someone or something, trust yourself and listen. It’s going to feel like life is picking up speed this month, but try not to get overwhelmed and ensure you make time for yourself in the season of giving.

December should be a month of real opportunity for you, Aries. An increased desire for social and romantic connections may drive you to seek comfort in the arms of someone new; this is a good opportunity to push your boundaries and try new things, but make sure you don’t act too rashly and do something you’ll regret. Towards the end of the month, you may find yourself feeling more stressed than usual, but the interaction between Jupiter and the Sun should help you power through this, and your achievements will shine through.

Early in the month, you may feel a desire to be selfish, and you’ll no doubt be frustrated by those standing in your way. Stand your ground if the issue is truly important to you, but a compromise may be in your best interests. December is all about relationships for you, whether it’s your family, friends or a romantic interest, and that’s where you should direct your energy. In the latter half of the month, Venus’ influence will increase your desire for love and affection, but it won’t come as easy as you’d like. Don’t lower your standards for the sake of an easy time, cos it’ll come back to bite you.

December will be a little tricky for you, Gemini. Although you may find yourself feeling low-energy, there are a lot of exciting opportunities coming your way that you should try and take advantage of. The Sun’s interaction with Neptune will lead to a lack of motivation in the second week, making it hard to be enthusiastic about hard work. Focus your energy where it’s needed most, and guard yourself from unneeded negativity from someone close to you. Things will start looking up after the new moon, with Venus giving you a boost in all things socialisation and romance.

December should be great for you, with romance on the cards for much of the month. Mars will bring you the energy and drive you need at the beginning of the month, after which Venus will be boosting your natural sociability. You might feel some pressure from work around the 20th, but looking at the big picture and prioritising will get you through it easily. You might feel a little anxious at the end of the month due to some friction between Mercury and Uranus, but that should shift with the new moon into excitement and new opportunities.

This month is likely to be a bit tricky for you, but don’t let that distract you from what December has to offer. Despite the stress, you’ll have a few lucky breaks, and this is a great time for if you need to make a good first impression. Around the 20th to 24th, Venus might cause your eye to wander – if you’re single, embrace it, but if you’re in a relationship then trying something new and saucy together should help. Your Christmas should be pretty relaxed, and you should concentrate on spending time with your loved ones.

December is likely to be a real mixed bag for you, Virgo, with a little romance and more stress than you’d like. The first week you’ll need to work quite hard to achieve your goals, but the transits of Venus and Mars should help things fall into place. Overall, this is a month to power through and wrap up those 2019 projects, so you can use the new moon at the end of the month to make a fresh start in 2020. It’s like that first day of school in September, with a brand-new notebook and a fancy gel pens – you know, what used to be your favourite time of year.

Jupiter is presenting you with the energy you need to push yourself this month, Libra – opportunities abound in the first two weeks, and you should take advantage of them. Don’t spread yourself too thin though, as once the planets shift and that burst of energy dissipates you might find yourself feeling a little overwhelmed. The full moon on the 12th will force you to re-examine your finances in the run-up to Christmas, and you should also take a look at your romantic prospects to consider what it is you want in life. It’s also time to wrap up any unfinished projects ahead of the new moon, which will inspire you with how best to move forward and a new direction for your creative energies.

Disruption from outside sources early in the month will leave you feeling frustrated. Let those feelings out in a constructive way and roll with the punches – what feels like barriers may turn into opportunities. The Venus-Saturn interaction from the 9th to the 13th can go two ways for you: if you’re settled in a happy relationship you’ll feel an urge to settle down and make big commitments to each other; but if it’s more unhealthy, you’ll find yourself looking for that romantic security elsewhere – perhaps with someone older. It’s time to end any toxic relationships, but maybe don’t jump STRAIGHT into bed with the cute guy from Sales at the office party…