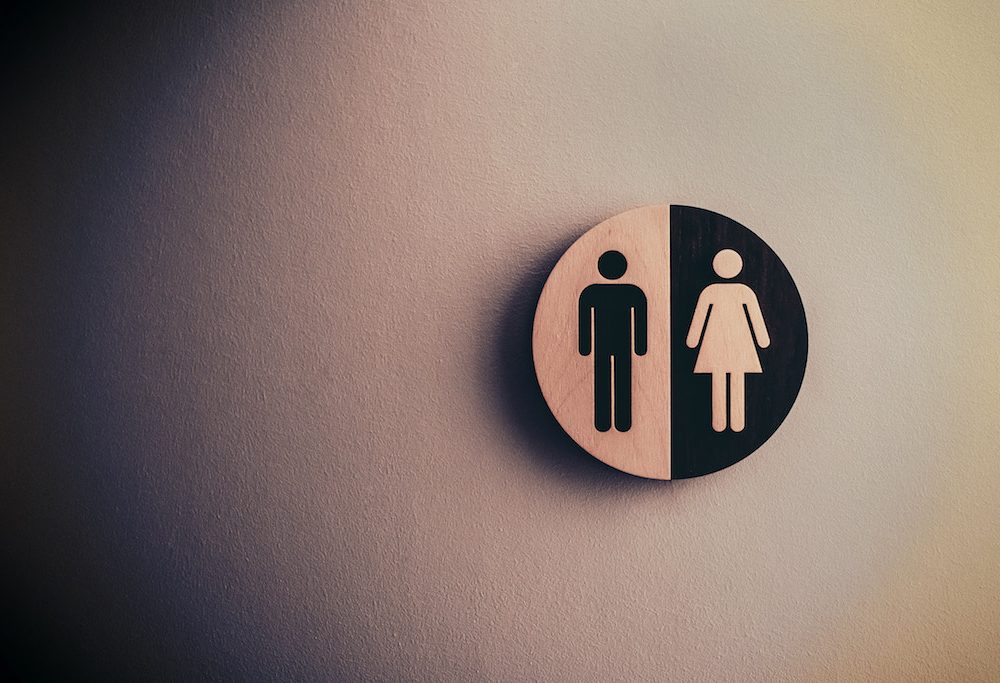 Coming Out As Non-Binary Helped My Anxiety

Realizing I’m non-binary felt like coming up for air after drowning. I felt an immense sense of freedom. I could change my hair, my clothes, my makeup or whatever else without worrying that it would change my gender identity. I can’t escape what others think of me, but I can control how I think of me. I am non-binary and my gender is my own. Understanding myself this way has brought me clarity and drastically decreased my anxiety. Even so, expectations within the LGBTQ+ community about what non-binary looks like have seeped into my life.

The binary gender system constrained me for years. It assumes that people can only be men or women and that those labels must be directly tied to genitals. I was assigned female at birth, but being called a “girl” or “woman” never felt quite right. In high school, I always got angry when people excessively used gendered language. I couldn’t understand why people had to say “boys and girls” instead of just “everyone.” It felt like something was being imposed on me, but at the time, I didn’t have the words to describe why it set me off.

As time passed, my rage grew. For a while, it manifested in self-destructive ways. I couldn’t seem to figure out what was wrong with me. I felt like I was somehow an imposter, that even I was unable to see who I really was. I didn’t recognize myself in the mirror because there was such a strong disconnect between my mental image of my looks and the reality in front of me. I later learned that I was experiencing gender dysphoria, something that many transgender folks face. But, at the time, I was so far away from the resources I needed to understand myself that I leaned into the self-hatred. I figured I’d just force myself into being a woman and things would turn out fine. I struggled with self-harm and attempted suicide before I turned sixteen. Thankfully, I was able to connect with therapists and build up a support system. Even so, it felt like something was missing. I still had so many questions about myself and why I felt the way I did. It filled me with anxiety, penetrating my thoughts no matter how good things were.

Finally, in my first year of college, I found answers. I read more about gender identity and my interest in transgender rights was sparked by Jack Halberstam’s book The Queer Art of Failure. It felt like someone was taking my messy experiences with gender and giving me the answer: the boxes are the problem. It’s not me. There’s nothing wrong with not fitting into “male” or “female.” For me, not fitting in feels like liberation. I don’t have to shove myself into boxes that were not made to accommodate me. I am free to grow and learn and live. My gender is a rainy afternoon, a thick sweater, a breath of fresh air. It is not a box on a birth certificate, it is a feeling.

My transformative experience of coming out to myself as non-binary has done wonders for my anxiety. It has not cured it, science is still working on that. It has decreased the anxiety I feel on a day-to-day basis. A great deal of my time that I had spent worrying about categorizing myself just fell away.

Something I didn’t expect, though, was the new physical constraints that came along with my mental freedom. The way I feel my gender and the way the people around me have been socialized into perceiving it do not align. We have all been programmed to gender people automatically based on looks. I wanted others to understand me the way I felt inside, so I tried to sort out what androgyny looks like on me.

I found that androgyny is nearly always associated with masculinity. Even in the LGBTQ+ community, the look of androgyny is alarming similar to the way a cisgender white man looks. Short hair, lanky build and a strong jawline are the pillars of society’s standard androgynous look. But, for me and so many others, androgyny does not look like that. Being androgynous can look any way at all. In safe spaces, like my home and around friends, I know I’m understood as non-binary and that gendered expectations aren’t being thrust upon me. Outside, though, I have to contort my body if I have any hopes of being gendered correctly. It requires binding, walking a certain way and subtly altering my tone of voice to remove the trained feminine politeness that punctuates every word I say. It’s a lot of work.

The anxiety I feel surrounding my gender has nothing to do with me and all to do with the world around me. It’s petrifying to walk into a room of new people and not know if I’ll be respected. It’s nearly guaranteed that I’ll be misgendered despite my pronoun pin on my shirt pocket and my clear statement of my pronouns along with my name. I carry this with me every day, just like many other non-binary folks.

If you’re reading this and want to help your non-binary friends, there are things you can do to help. It just takes a little effort. Normalize asking for pronouns. Share your pronouns whether you’re cisgender or transgender. Do the work to unlearn the harmful things you’ve been taught about gender. Nobody’s going to be perfect, but the least you can do is try.

If you have the means to help the trans community financially, consider donating to Trans Lifeline, a suicide hotline created by and for transgender folks.

« Boris Has a Problem With Women
October Horoscopes »