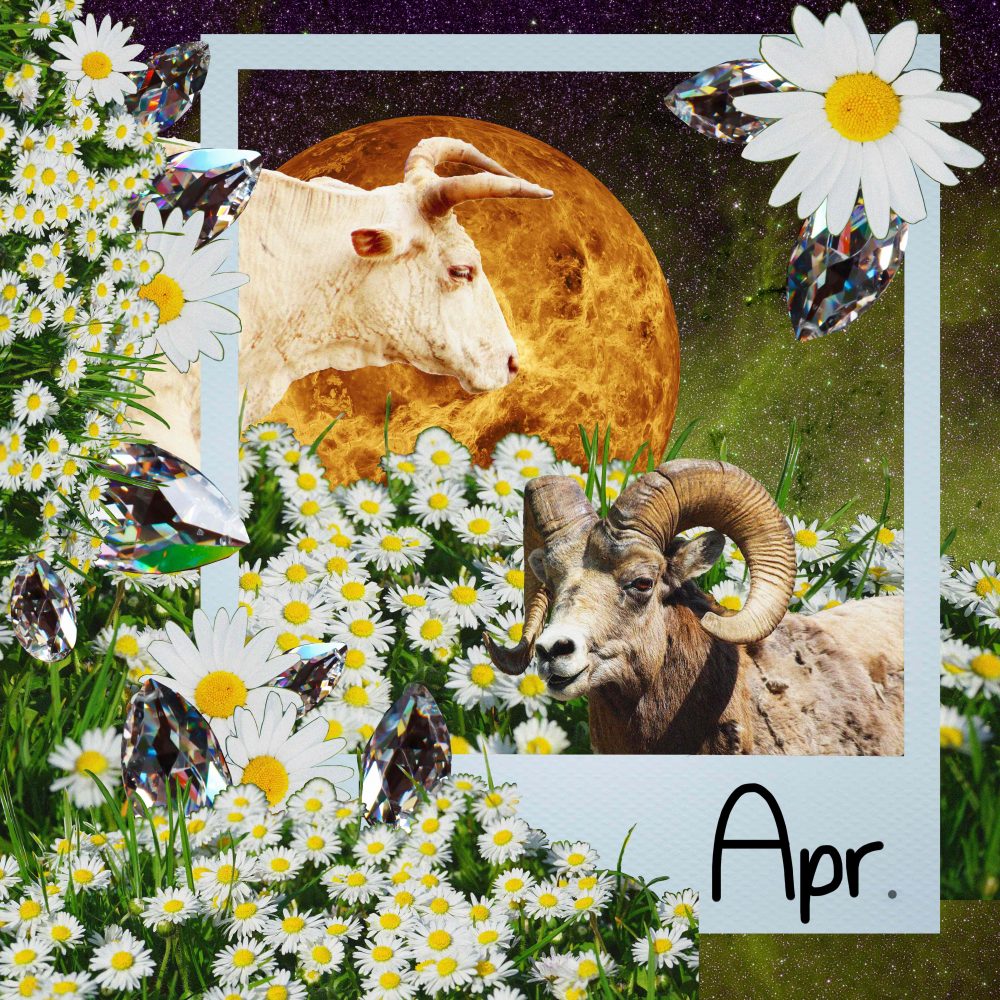 What’s in the stars for April?

As we enter April there’s only one thing on our minds.

While astrology should never be used to predict the outcome of a global pandemic – I’m an astrologist, not a virologist – I can offer you a little insight and guidance as to how your month will play out. In this period of heightened stress, it’s not surprising that there’s plenty of tension showing up in everyone’s charts.

What’s important to remember though, is that there’s more to life than just coping with the state of the world right now. There are still people in our lives that need our support, people that will be there for us in turn. We need to focus on the good, and work together to get through the bad.

For now though, let’s have a look at the two universal astrological events this month, the full moon on the 7th and the new moon on the 22nd, as their influence will be felt by us all. April’s full moon will bring everyone’s attention back to the home and family for the two weeks following it. Increased tension at home (lockdown will do that to ya) may lead to conflict, and a Mars-Uranus interaction just before the moon rises will make us feel more impulsive. Working out that energy in a safe way is paramount, as we all need to behave responsibly for the sake of everyone else.

The new moon always represents the end of one 28-day cycle and the start of a new one. The 22nd is the time for fresh starts, new projects and goal-setting. While you may again feel the need to act impulsively (it’s kind of a running theme this month – classic Aries energy), it’s important to take your time and be open-minded in how you expend this energy.

Happy birthday to all you April Aries babies! Although you’re probably stuck indoors, there’s no reason why you shouldn’t still celebrate the wonderful womxn that you are. This should be a great month for you, with Mars giving you energy and confidence in the first half of the month, meaning increased charisma and making it the perfect time for improving relationships, whether that’s at work or at home.

Mercury’s influence in the second half of the month indicates the need for quick thinking and flexibility, while its interaction with Venus will leave you craving social time. As difficult as this might be, there are ways to still see your friends and make time for them – it’s important to keep that social meter filled up or you’ll wind up feeling frustrated and lashing out at those you care about.

You’re probably already feeling cooped up and irritated, Taurus, and a Mars-Uranus interaction at the beginning of the month will be aggravating it. Breathe deeply and acknowledge that the restrictions are in place for a reason, and as much as they may irk you, rebelling for the sake of it isn’t worth it.

Around the middle of the month, Mercury’s position in your chart indicates some good news, and this is a good time for socialising, whether that’s virtually or with people in your home. Towards the end of the month, happy birthday to the April Taureans! Your focus will shift to yourself (as it should, you only get one birthday a year!) and the Sun’s influence will make it easier for you to make a fresh start as you enter a new year on this earth.

A little energy from Mars and Venus at the beginning of April is bringing some passion to your life. Whether it’s at work or romantically, you’re bound to succeed this month.

Mercury’s influences around the middle of the month will bring you some good news and socialisation, but once we reach the new moon on the 22nd you may find your world slows down a little. Bring your attention back to your home, as someone there needs your support and guidance. Flexibility and empathy will take you far, but watch out for sudden changes that require a quick change in y our attitude.

You’ll be feeling even more spiritual than usual this month, Cancer. Embrace your mystical side and practice hobbies that make you feel more connected with the natural world, especially at the beginning of the month – they will help ground you in these turbulent times. Around the full moon on the 7th you may feel impulsive, but you must remain cautious.

The Sun’s interactions with Jupiter and Pluto around the middle of the month may lead to a bit of an ego-boost – this is well-deserved, but try not to let it go to your head or it may come back to bite you. Around the end of the month, Uranus should bring positive change to your life, and that spiritual side of you that we nurtured earlier may bring you some surprising insights – listen to them, and take a step outside of your comfort zone.

It’s going to be a social month for you, Leo, but then that’s nothing new is it? You might be doing it from home, but it’s the perfect time to ramp up interactions virtually, whether that means reconnecting with old friends or solidifying your current friendships. A little help from Venus at the beginning of the month will be bringing some tranquillity to your life, and Mercury’s influence around the middle of April indicates some good news.

This is the time to promote yourself and go after what you really want! The second half of the month is your best time for dating, thanks to Venus and Mars – potentially tricky while self-isolating, but if anyone can make VR dating work, it’s you, Leo. At the end of the month you might find that you have a build-up of nervous energy – work it out in a constructive way or you’ll find you’re liable to make mistakes.

Right fellow Virgos, here we go. We’re starting April strong with some help from our ruling planet and number one pal, Mercury. The first week of April is going to be our most productive period in ages, as it’s perfect for making plans, applying to jobs and we’ll be more persuasive than ever.

Around the middle of the month Venus will have us craving a little romance, but it’s going to be difficult for us to get it – not exactly surprising since most of us are self-isolating. Just don’t lower your high standards for anyone, and focus on what you really want in a partner. Towards the end of the month, the Sun’s interaction with Uranus will bring some pleasant surprises and increased freedom. A little introspection and reflection may bring you new insights into your desires. This is the time to take a risk.

Mars is boosting your energy levels this month, Libra. You’ll find that you’re feeling fired-up but not aggressive in the first half of the month, and you should use that energy to impress at work and you’re bound to succeed. Around the middle of the month Mercury’s influence may leave you feeling stressed out and anxious, so take care when talking to others and think before you speak. Try and compromise where you can, as digging your heels in will only aggravate others further and won’t give you the desired outcome. At the end of the month you’ll be feeling even more opinionated than usual, and there’s a possibility that you may find yourself feeling jealous and annoyed by those around you. Take a deep breath, and concentrate on bettering yourself – it’s just the stress of the current climate getting to you.

You’re going to be starting April with buckets of energy, Scorpio. You might find yourself getting frustrated if you’re not moving as quickly as you’d like, but dig deep, persevere and you’ll find that you meet your goals sooner than expected. Around the middle of the month, you’re likely to find yourself feeling cooper up and stressed out, but the consequences aren’t worth the satisfaction that rebelling would bring you. Be cautious, as this is one of the turning points of your year and you will feel the ripples of any impulsivity for the rest of the year. Work out your frustrations in a productive and healthy way, whether that’s through sex or challenging yourself to a more difficult home workout routine, and try and practice empathy – it will serve you well.

Venus is boosting your social life this month, Sagittarius, despite the fact that you’re likely self-isolating. Virtual socialisation is easier than ever, and this is the time to take advantage of it. You might find that you’re more interested in spending time with friends than working hard this month, but remember to make time for all of your commitments, not just the fun ones. You may also find that cracks start to appear in unhealthy relationships this month, so keep an eye out for those who take any opportunity to drag you down. Around the middle of the month Mercury’s appearance in your chart indicates some good news, and this is a good time to start new ventures and make plans. Towards the end of April Mars is boosting your innate sexuality, be direct and you’ll find that all things sex and romance fall into place.

At the beginning of April your mind will be focused on all things relationships and romance, Capricorn, but your priorities will shift after the first week to make all things work. This doesn’t mean that romance should be brushed aside however, as life is about to become hectic and someone special may provide a solid grounding for you. For the rest of the month, your attention will be on the rapid pace of life and work, and you may find yourself becoming increasingly stressed. Take your time and don’t be rushed into making big decisions.

At the end of the month, life will begin to slow down again, and you’ll find yourself returning to your relationships with a new sense of gratitude.

While your free spirit is no doubt desperate to break free of restrictions right now, Aquarius, you need to work that energy out of your system in a healthy way. Acting impulsively right now will come back to bite you. Venus is directing you towards those closest to you, who will help ground you in this tricky time. You’ll also find that the middle of the month is the perfect time for finding love and romance, and you might be surprised by who you click with.

The Sun will be boosting your energy levels later in the month, and you’ll find that you feel more creative than ever. Use that artistic energy and make progress towards your goals. There may be some challenges ahead in April, especially at the end of the month, and you might feel weighed down by life’s difficulties. Practice patience and determination and that weight will soon lift.

A nice little Mercury-Neptune conjunction at the beginning of April will focus your mind on all things mystical, so embrace your spiritual side this month, Pisces. You may discover something new about yourself or those closest to you with a little introspection and focus on your home life. Around the middle of the month, Venus will increase your need for all things romance, but that can be tricky when you’re in lockdown. You may have to work harder to get it, but don’t lower your standards for anyone.

You should also keep an eye on your finances, as you could easily spend more than you intend. At the end of the month, the Sun’s influence will be brightening your days and increasing your creativity. Embrace it, and you’ll find that you make real progress.