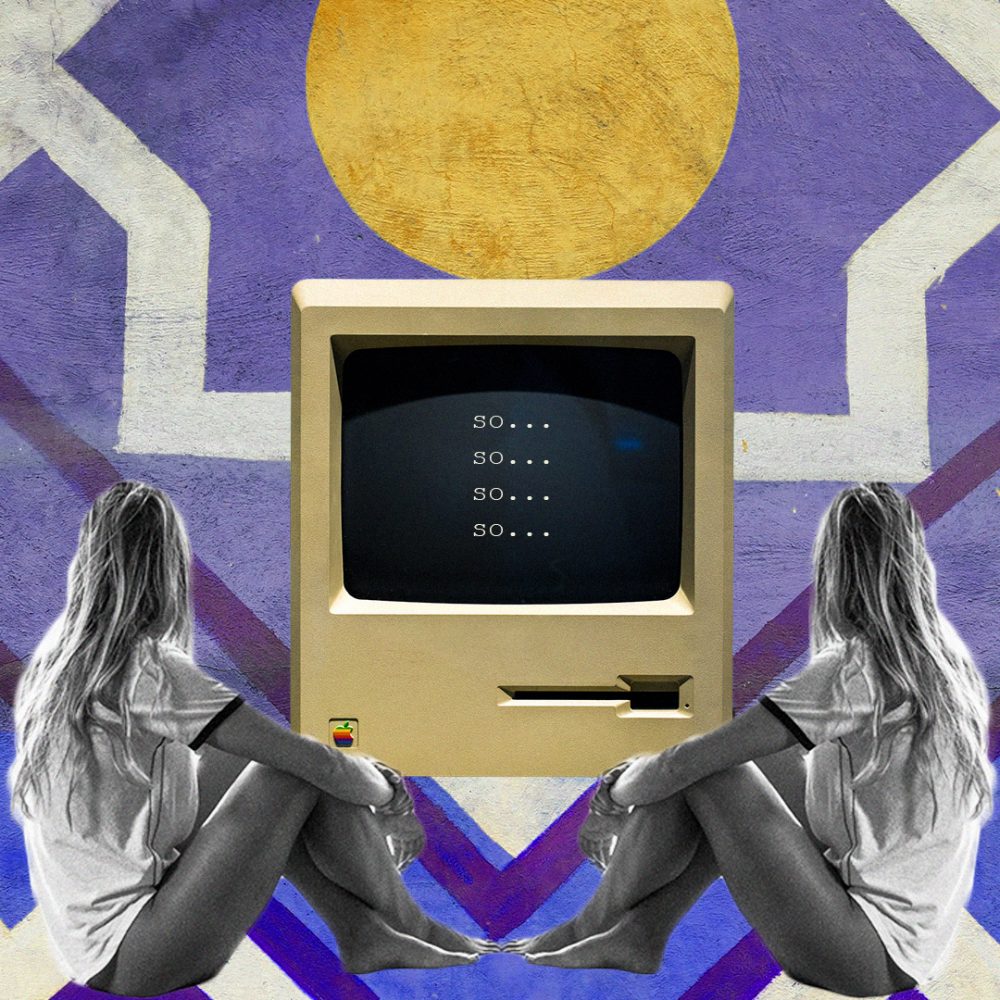 All We Have Now Is Conversation

Alya Mooro gets honest about the joys, drawbacks, and truths revealed by the now pervasive zoom call

“After lockdown remember who checked on you… texted you… supported you,” read a tweet that went viral last week. And while many responded accusing the tweeter of being narcissistic, and reminding them of the fact that everyone is currently going through *the most* and really just trying their best, there is something to be gleaned about our friendships right now, even if it’s not quite that.

I was on the phone to a friend last night when she told me of a realisation she had had that day. Now that all the very many fun social occasions were impossible – dinners at loud restaurants and dancing until the early hours and etc – she was realising who her actual friends were, she told me.

Indeed, while phone calls and video chats are now our only way of keeping in touch – global downloads for apps such as Zoom and Houseparty accordingly reflected a 100% increase last month – for many of us, it’s been a long time – if ever – since we engaged with some of our friends while doing nothing but spending time in each other’s company.

Many of our friendships are often forged and based on doing things together and on activities, even if it’s just going to the pub for drinks. So, who do we actually want to chat to? Who do we still have things in common with, now that all we have is conversation?

In truth, we’ve never had so many friends. I’ve got over 1,000 Facebook friends and despite my semi-regular attempts to cull, some of them are people I don’t even or just barely remember meeting. The definition of ‘friend’ has become increasingly subjective, not least due to Facebook’s usurping of the term.

An article on The Guardian last year outlined several types of friendships, from school friends: “our first comrade of convenience,” work friends, sesh friends who “beyond semi-deep 5am experiences, you have no involvement with whatsoever,” to internet friendships and beyond. Last year another term also went viral: ‘weekday friend.’

There’s a lot to be said for how special each kind of friendship can be; all the versions of ourselves that being around those friends can reveal, and the experiences that come with that. In truth, there are all sorts of friendships, and each one contributes to shaping us, creating both our worlds, and the dimensions through which we see them. But that doesn’t always translate well to a Facetime conversation when it’s you, yourself and your empty apartment.

Studies confirm that while people have about 50 ‘general’ friends, we only have about 15 close friends, and would only ask for help from about four of them. The truest kind of friendship requires us to be vulnerable enough to care, and to be cared for, as well as to reveal things about ourselves that may not always match the person we portray ourselves to be online.

The truest kind of friendship requires us to be vulnerable enough to care, and to be cared for, as well as to reveal things about ourselves that may not always match the person we portray ourselves to be online.

With many, if not all of us, currently in a state of anxiety and worry, then, perhaps it’s never been more obvious who we actually feel able to confide in and to be ourselves around, whose very face and voice can brighten up another mundane day in self-isolation, from behind a screen.

But we also may not be in the mood to chat to friends right now, even if we do truly love them. We often like to be our best for our friends, to be positive and caring and engaging. Many of us don’t feel able to do that on demand, if at all, right now.

Plus, for those who are fortunate enough to still have work, many are finding themselves working harder and putting in long hours behind a screen and on endless conference calls. The idea of spending even more hours staring at a screen after logging off, then, even if to chat to your very best friend, can be daunting. There are many evenings where the promise of shovelling carbs down our throats while watching TV seems like a more preferable option.

Indeed, studies show that video calls require more effort than meeting up IRL as our brains have to work harder to process non-verbal cues, all while dealing with the dissonance of not actually being together. That means that we’re often wholly exhausted, and still finding something lacking when we log on to jittery screens and the often part-performative art that is the video-call.

If there’s anything that the Coronavirus and the resulting quarantine that has been going on for forever long now has done, it’s put things into focus, helping us all see our lives and the world a little bit clearer, and putting into perspective what we want for ourselves, and what, or who, is truly important.

And perhaps it’s okay if we don’t necessarily want to chat to some people while we’re in quarantine. Or ever again. An unpopular opinion I am strongly in favour of is that we are allowed to outgrow people, even if they are our friends. Now that all we have is conversation, it’s more obvious than ever who we actually want to chat to.