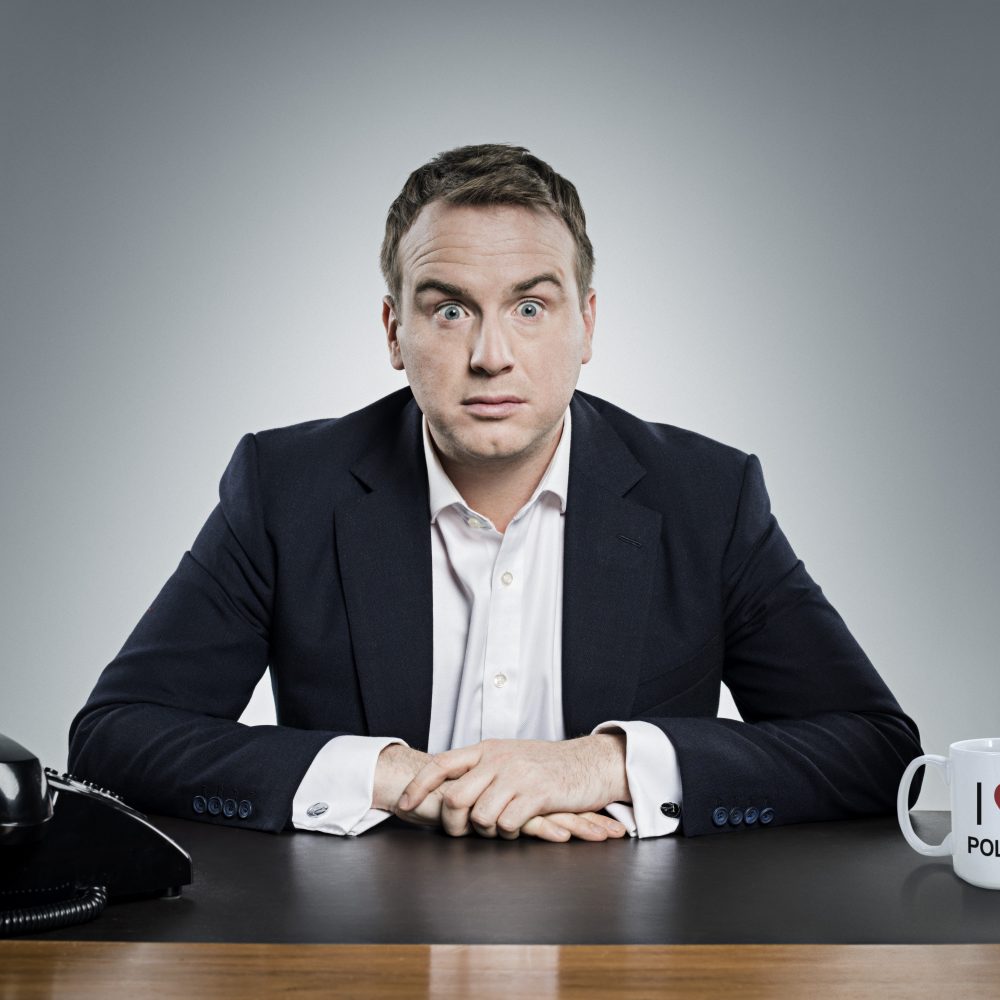 A Depressed Observer on Hope in Politics

Matt Forde might be mining the current political chaos for laughs, but he’s also keen to tell us that these depressing times won’t last forever, and it’s the youngsters that just might save us. He reminds us things are always darkest before the dawn, and it is the next generation of leaders who will be leading us to this promised sunrise.

“There will be a whole reaction against this,” says the political satirist. “We’ll see something that is open, socially liberal, internationalist, that says this view of Britain that is stuck in the past isn’t even a Britain that is in living memory for anybody 18 now. Those younger people feel open, European, international. We’ve never had an organised pro-European movement in this country and now we have the genesis of that through the People’s Vote group and I think that is going to grow and grow. It might be in 20 years time, but I think that will definitely happen.

“History tells us so. Back in the 1990s, the Labour Party (whom Forde previously worked for as an adviser) spent 18 years in the wilderness and it led to a highly electable manifesto. Next time, it could come from any of the three major parties or maybe a new one.” (Just as I’m writing this, former Cabinet member Rory Stewart has announced his departure from the Conservative Party to run for London Mayor as an Independent candidate, so Forde may be onto something!)

In the meantime, however, at least we have satire. Forde’s latest show ‘Brexit, Pursued By A Bear’ delves into Brexit, independence, the Labour Party, Trump, as well as the more timeless themes of jealousy, incompetence and travails of Parliament – all sweetened by a catalogue of uncanny impersonations and up-to-the-moment gags – and it appears, despite previously working for the Labour Party, he’s now an equal opportunities offender, with both main party leaders “getting a bashing” in his show, which he offers as “a tonic, somewhere to laugh blackly but also understand what’s going on”.

For a start, he has not even a grudging respect for Boris Johnson and his conduct in power. He explains: “Part of the show hinges on my giving a good impersonation and therefore exposing his bullshit in quite a unique way – there’s a thrill in that, as a performance piece. And usually when I can impersonate someone it makes me like them more, there’s a fondness because you’re pretending to be them, but with Boris Johnson, he’s a demagogue and a populist and I think he’s really seeking to divide in a deliberate and profound way

“Everything that he’s done since becoming PM I think has been completely irresponsible and how he’s behaved is far below the standards we should expect of any leader. I’ve been able to respect politicians I’ve disagreed with, most people can, but this is just off the scale.

“He just wants power for its own sake, totally like Trump. We know that from the fact, his whole life he’s been liberal and open to the EU, and suddenly he chooses Leave and that is how he is ruling the country – this is all a cynical ploy to stay in power for as long as possible.

“What I find so distressing is the consequences of his behaviour are really long term for all of us and the way we talk to each other – it’s pulling society apart. This is a discussion conducted in a deliberate tone manufactured to be divisive. He wants his opponents to be upset. I morally and emotionally struggle with that.”

The problem is, of course, that the Opposition leader has proved equally fallible at a time when the country desperately needs his voice.

“All those things I’d level at Johnson, a desire to divide not unite, to deliberately antagonise moderate people, Corbyn is equally culpable,” explains Forde, noting the recent debacle at the Labour Party conference when a motion was carried on a count of hands, and then over-ruled from the platform.

“I used to work for the party,” remembers Forde, “and card votes are a crucial part of the democracy of the conference floor. A show of hands is not a way to run a modern democratic anything, and anywhere it’s so close, you allow a card vote. For them to overrule… it’s a kangaroo court and openly admitting it is.

“I’m not saying it was fix, they may well have won the card vote, but it did not satisfy the needs of a democracy. For Corbyn to then get up the following day with the Supreme Court decision that Johnson’s prorogation was unlawful, and say, ‘We would not offend democracy’ when he’d just done it the day before, I don’t know how he says it with a straight face.”

What about the party leader’s brand as a gentle, tomato-growing soul who just wants the best for the country? Forde’s having none of it.

“That allotment is one of the greatest pieces of misdirection in British political history, because the public think, if he’s a dozy jam-lover, how can he be a manipulative Anti-Semite? I don’t know how you run the party like that, allowing members to stay with the heart-breaking abuse that’s gone on. What he’s done to the Labour Party is just as bad as what Johnson has done to the Tory party. If Corbyn got in, the way they run the party is the way they’d run the country and I can’t imagine what Britain would be like for Jewish people. But people have incrementally started to realise there is something more going on.”

If Forde has poured his pessimism into gags in the short-term, his show is full of jokes, impersonations, food for thought, plus the hope that one day things will get better. “So many people are turned off by this period we’re living in, and there will be a huge reaction, particularly among the young people.”

So he’s optimistic – even if it means no more comedy material?